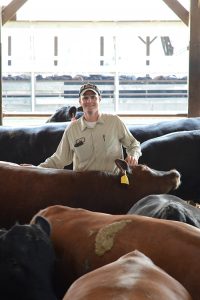 Since he was a young child, Ken Beever of Waterman, Ill., longed to be a farmer like his grandfather. Beever would follow his grandfather around, baling hay and other chores to help out on the family farm. “I love being outdoors and working with animals,” he said.

That’s exactly what Beever was doing on March 10 of this year, when he was busy at the cattle feed and crop farm where he works in Maple Park, Ill. It was a typical Friday; most of the work was finished for the week. All that was left to do was unload and weigh a load of 60 steer and heifers that had just arrived. That is, until a frisky 600-pound steer jumped over the scale door and managed to sneak past the farm’s perimeter fence. “He wasn’t acting unusual,” Beever recalled. “We were shocked.”

As the steer rumbled away, the crew gave chase with Beever trailing on a utility vehicle. As he approached the fast-moving animal, Beever’s vehicle hit a steep part in the waterway, located in the field. As the vehicle went airborne, he braced for impact, jamming his foot onto the brake, before tumbling into the grass. “I didn’t think anything was broken,” said Beever, who scrambled to his knees. “It just felt like I got kicked in the hip. But as I tried to stand up I knew it was worse than I thought.”

Rushed to the hospital

Beever’s co-workers rushed him to a local hospital where he was stabilized before being transported by ambulance to the Level I trauma center at OSF HealthCare Saint Anthony Medical Center. OSF is verified for trauma by the American College of Surgeons (ACS) Committee on Trauma, and is the only verified trauma center in Rockford, and one of only two in Illinois. This verification ensures delivery of optimal care for injured patients.

Upon his arrival, Beever was greeted by Edward Pyun MD, trauma medical director, and the rest of the team. “The concern coming from a farm or a smaller hospital is you don’t know what other injuries the patient has sustained,” Dr. Pyun said. “At a Level I trauma center like we have here at OSF HealthCare Saint Anthony Medical Center, we can marshal all the resources we need to take care of the complex trauma patient. We have the right ancillary staff, and subspecialty surgeons that we need for these cases. A level I trauma center means better outcomes.”

“Anytime you have a high trauma injury that involves a joint in a young healthy worker or laborer it’s a concern,” Dr. Earhart said. “The primary injury was to the back of the hip socket. We performed a modified version of the approach used in hip replacement surgery to preserve blood flow to the bone, while allowing the broken bones to be fixed with stainless steel plates and screws. It meant a bigger incision, a bigger scar and more time needed to heal.”

The prognosis for the hip was guarded and the prevailing thought was Beever would miss about six to nine months of work – a devastating thought to Beever. He is married to wife Sara and the couple has two young children, Max, 5, and Avery, 1. “I felt like I was letting my wife and family down,” he said. “I thought I’d have to find another line of work and that my hip would never be the same.”

Beever went home six days later to begin the long road to recovery. He started working with therapists from OSF HealthCare Home Care to regain the strength and motion in his hip. He started using a walker before moving to crutches. In early July, Beever returned to work without any restrictions and just 110 days after his accident. “It felt good to be back,” he said. “I haven’t missed a beat.”

“He was a good candidate to get back early,” Dr. Earhart said. “At the end of the day, the patient with an orthopedic trauma injury will do better if they’re active in their care, have strong family support and who are positive and motivated to get back to where they were in life.”

“I can’t thank OSF HealthCare enough for the excellent care I received,” Beever said. “They treated me more like a family member than a patient. The doctors, nurses and staff helped me return to doing what I love to do the most.”