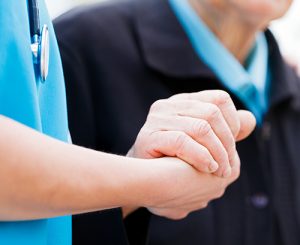 It was unusual for Ray Petroski to call his wife, Kathy, from work.

But on June 15, 2017, Ray, 75, who works part-time in the seafood department at Schnucks in Bloomington, called home.

Kathy, 71, had just woken up and didn’t feel very well. “I had indigestion, and it just got worse and worse. When Ray called, I told him I wasn’t feeling too well and he said he was going to come home. It’s a good thing he did.”

Ray said Kathy “told me she was having chest pains. I said, ‘I’m coming home. We’re going to the ER.’”

“When I got home, she didn’t really look all that good, so I said, we’re going. I got her in the car and drove over,” Ray said. “As soon as I got to the hospital the St. Joseph people took over. They did everything. In hindsight – I didn’t really know the seriousness of it. Looking back I should have just called 911 and not have taken her myself.”

Kathy had a heart attack in 2004 and had a stent put in to clear an artery. She’s been on various medications since.

But that morning in June, Kathy knew what she thought was indigestion or acid reflux was likely another heart attack.

Ray said from the moment they arrived at the ER everybody concentrated on Kathy.

“Upon arrival at the Emergency Room, I went to the desk and told the girl there that my wife was sitting in the car and she was having chest pains. From that moment on there was nothing but action involving the staff at St. Joseph,” Ray wrote in a letter to OSF St. Joseph administration thanking them for the excellent care by hospital staff. “She immediately got a wheelchair and hurried to the car with me. She helped my wife into the wheelchair and pushed her back inside as I moved my car. After I returned to the Emergency Room, I was told my wife was having an EKG done and I was taken to the room.” 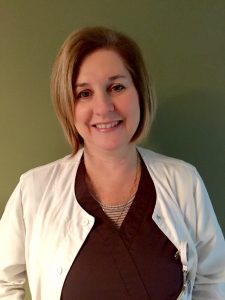 Kathy was then taken to another room. Ray was standing in the back as Kathy was being asked questions about her health history.

“She was attempting to answer them, and then completely unexpected by me, one of the people in the room said clearly and distinctly, ‘She just went!’ In the next few seconds I tried to process in my mind just exactly what those words meant … I looked at the monitor. It was a straight line. She had straight lined. Immediately, a staff person standing next to me, gently took me by the arm and said we can’t stay in here,” Ray recalled. “She led me from the room to a chair in the hallway. As I left the room I could see so much activity taking place. This lady did not leave my side the entire time people were in the room working to save my wife. It didn’t take all that much to figure out her heart had stopped.”

Jan Crawford, the manager of the OSF St. Joseph Emergency Department, was the woman who didn’t leave Ray’s side.

On that day, Jan remembers the ER was packed. “Every room was full. This gentleman brought his wife in by car and staff recognized how sick she was.”

Jan said the call went out on the overhead intercom that there was a myocardial infarction, commonly known as a heart attack.

“I just kind of walked down to the room. They were getting the patient ready to go to the cardiac cath lab and the husband could see us working really fast,” Jan said. “(Ray) just kept saying, ‘I didn’t get to say goodbye.’”

And then Kathy was revived.

“In my head,” Jan said, “I wanted to make sure Ray saw his wife before they took her to the cath lab. She was alert and a little more stabilized by now. I asked the staff to wait a second to let the husband see her. He gave her a kiss and she told him, ‘I’ll be OK.’ I just remember he was so distraught just a few minutes earlier.

“I had to make sure he got to see her … just in case,” she said. “I’ve been a nurse for 29 years … your priorities change. If she didn’t make it, it would have been his closure. I needed to make sure he had his time. Seeing her, to me, it just had to happen.”

Kathy said the last thing she remembers was answering questions. “They did CPR, I know that, because when I came to I could feel it,” she said.

The heart attack this time, Kathy said, was almost in the same spot as the one in 2004. “They thought maybe a clot had gone off the old stent,” she said. “They just kind of replaced the old stent with a new one.”

Two days later, Kathy was on her way home.

Ray was so impressed with the care, he wrote his letter of thanks and hand-delivered it to the administrative offices.

“From the moment we got to that ER and went up to the desk … everybody concentrated on Kathy. Those people were all so nice about everything. They provided outstanding care for Kathy, and I wanted somebody to know it,” he said.

And while the staff that day was doing what they are trained to do, Jan said sometimes you don’t realize it’s the little things that make a difference.

“A couple days later I saw Ray going up to see her, and I was thankful she made it,” Jan said.