Aneurysms are quite common. Experts suggest about 5% of people in the United States have an unruptured brain aneurysm, which accounts for about 6 million people – and many of them won’t even know it.

“Anyone who carries a brain aneurysm is at risk of bleeding. An aneurysm can rupture based on many factors that we know, and many other factors that we don’t know,” said Dr. Akram Shhadeh, who specializes in interventional neurology.

What is a brain aneurysm?

A brain aneurysm occurs when a part of an artery in the brain becomes weak and stretches thin. Sometimes called a “berry”, it can look like a balloon or a bulge on a tire tube.

Brain aneurysms develop silently, or without any symptoms, but can pose a serious threat. Aneurysms can rupture, causing a brain bleed or subarachnoid hemorrhage, both of which can be devastating and even deadly.

Some aneurysms are stable, while others are at higher risk of growing and bleeding. 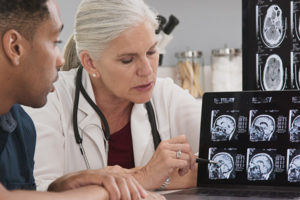 Aneurysms can be often treated with traditional endovascular coiling, also called coil embolization. With this minimally invasive treatment, surgeons reach the aneurysm by guiding a catheter through a blood vessel in the groin up to the brain. Then, a small, soft coil is placed in the aneurysm.

More complex aneurysms may be treated with a different technique, such as embolization using flow diverters. This involves deploying an implant inside the affected blood vessel, which blocks the flow of blood and allows the aneurysm to heal.

“This is a revolutionary device that enables us to treat very complex aneurysms that were untreatable in the past. We’ve done many of these so far and have had great success,” Dr. Shhadeh said.

Creating a treatment plan for brain aneurysms requires careful consideration of many factors, including the location, size and shape of an aneurysm, the anatomy of blood vessels in a person’s brain and their personal and family health history.

“We make a customized plan for each patient. There’s no one-size-fits-all in our approach,” Dr. Shhadeh said. “It’s very important that patients with a brain aneurysm go to the most equipped center because you have to be very good at what you’re doing.”

Some people are at higher risk of developing a brain aneurysm.

For those who are at high risk of developing an aneurysm or who have a history of aneurysm, a test such as a CT angiogram or MR angiogram may be used to diagnose any unruptured aneurysms before symptoms begin.

“For patients to get a definite answer about whether they have an aneurysm or not and what their risk of bleeding is, they have to go to the experts in brain aneurysms,” Dr. Shhadeh said.