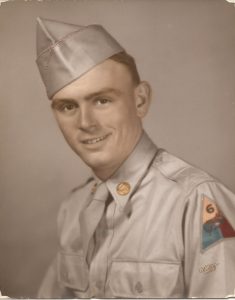 James Purl, of Galesburg, has always been humbled by the sacrifice our veterans have made for our country. He honors their service by raising money with Shave for the Brave to send veterans on the Honor Flight.

“The Honor Flight takes veterans to Washington, D.C., to visit the veteran memorials,” James said. “It’s a lifechanging experience for many veterans. They can come to terms with emotions some of them have never confronted before. Many of them come back a different person.”

James was excited about taking the Honor Flight with his grandfather, Richmon Purl, a Korean War veteran, who was suffering from heart and lung issues and severe arthritis. But like many people of his generation, Richmon always deferred so other veterans could go.

In June 2016, Richmon’s condition deteriorated, and he started receiving hospice care from OSF Hospice while living at Marigold Rehabilitation and Health Care Center. Richmon decided it was time for his flight.

“It started to look like he wasn’t going to make the flight. They weren’t sure the Honor Flight medical staff would be able to help him in an emergency. They requested a nurse accompany him,” James said. “We couldn’t afford to pay for a nurse. But OSF Hospice stepped up and paid for his hospice nurse, Kayla Glisan, to go with him. It was a very generous offer.”

A team that goes the extra mile 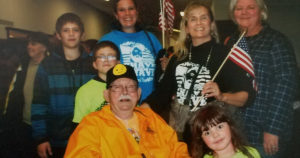 The other barrier was getting Richmon from Galesburg to the Quad City International Airport, 40 minutes away, and back.

Marigold Rehabilitation and Health Care Center stepped up and offered its service vehicle. All the pieces were falling into place.

“This was truly amazing. Everybody: Shave for the Brave — which raised $50,000 — the Honor Flight, OSF Hospice, Marigold and even some veterans who stepped aside so others could go, stood up and made this possible,” James said. “It was a great honor. My grandfather passed away in January and wouldn’t have made the next flight. It was a special day for him.”