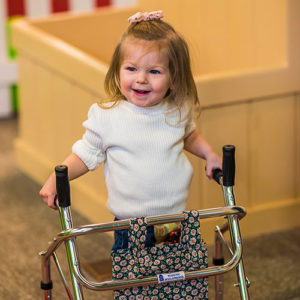 Adalie Guth has spirit and spunk far beyond her two years.

She’s big into Sesame Street’s Ernie, chatters away in complete sentences and is quick with a smile that brightens the room.

When her parents, Kassi and Brian Guth, take her to the nursing home where her great-grandfather lives, she easily befriends the residents there.

“She goes up to the older people who have walkers and shows them, ‘I have a walker, too.’ Those are her people,” Kassi chuckled.

Adalie was born with multiple congenital abnormalities. She’s missing the left side of her pelvis, her left leg and some of her gastrointestinal system didn’t connect properly.

“Something happened to her from conception – something didn’t develop right,” Kassi said.

Kassi was 20 weeks pregnant when a sonogram showed the baby’s left leg was missing.

“It was really shocking,” Brian said.

Kassi added, “We cried for about three days.”

The Eureka, Illinois, couple said the remainder of the pregnancy involved doctor visits every couple of weeks, including with Maternal-Fetal Medicine at OSF HealthCare Saint Francis Medical Center in Peoria.

“They really couldn’t tell us much else – only that her leg was missing,” Kassi said. “But it seemed like every time we saw the doctor there was something else. Her heart was fine, but they couldn’t find her right kidney and when she was born, they thought it still was missing. It wasn’t until she was 3 or 4 months old they determined the right kidney had fused with the left into one large kidney.”

On December 22, 2016, Kassi had a cesarean section at 37 weeks due to her blood pressure and Adalie being breech.

Since Adalie’s bowels didn’t develop properly she underwent colostomy surgery on Christmas Eve when she was 2 days old.

“We went home on New Year’s Eve – we were a little surprised. She was so small,” Kassi said.  “But it turned out she was such an easy baby.” 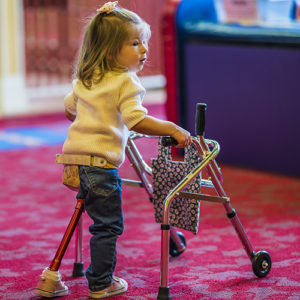 Adalie Guth uses a walker to help with her balance, and remains independent thanks to therapy and family support.

Adalie scampers up the stairs to the second floor of the family’s farmhouse built by Brian’s great-grandparents.

When Adalie tackled the stairs at home, Kassi said “it was kind of at that moment, that I was like, ‘OK, she’s going to be just fine.’”

In the past year, Adalie has welcomed a new friend, Lefty Lucy – a prosthetic leg she was fitted with at Shriner’s Hospital for Children.

At her age and size, the prosthetic doesn’t yet have a knee joint, so she’s had to learn through therapy how to stand up, sit down and walk when she has it on. She uses a walker to help with her balance.

Her pediatric physical therapist, Monica Blunier with OSF Children’s Hospital, has been working with Adalie since she was 3 months old. Since February 2018, weekly therapy sessions focus on improving Adalie’s strength and balance when she’s wearing the prosthetic leg.

“She’s learning to walk independently. She can walk across the room without her walker. She’s close to standing up. We’re helping her be as independent as she can,” Monica said.

It was Monica’s idea to name the prosthetic leg.

“With little kids, they don’t understand left and right so when you want them to focus on the prosthetic, you can refer to it by a name. It’s easier for them to figure out what you’re talking about,” she said. “She’ll tell people, ‘this is Lucy (pointing to her left leg) and this is my real leg (pointing to her right leg).’”

A future without  limits 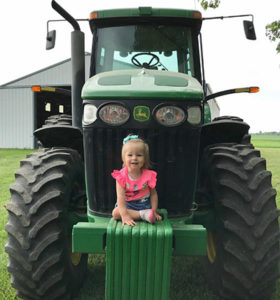 A cheerful Adalie Guth sits on a tractor on her family farm.

“She’ll be able to do whatever she wants to do. She’s spunky. She’ll figure it out,” she said. “She has an amazing spirit. She just makes you smile. Everyone sees her and they just light up.”

Kassi agrees, knowing her daughter has a future without limits.

On the medical side, there will be a surgery to reverse the colostomy, continued monitoring of her kidney situation and there will be new prosthetic legs as she grows.

“Nothing has stopped her,” Kassi said. “All the fears and things we thought could happen – didn’t happen. We just look at her and say, ‘she was born that way and that’s the way God made her.’”