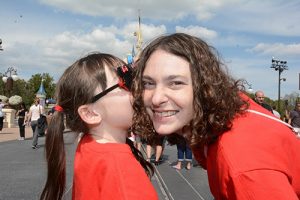 April and her daughter, Lexi

Imagine being told your baby has a half-dollar-size hole in her heart. That’s exactly what David and Judy Hall were told about their daughter, April.

April Cooper, of Manito, Illinois, was born in Paducah, Kentucky, on July 16, 1981. She was diagnosed with a congenital heart defect called atrial septal defect (ASD) – a condition where a hole lies in the septum that divides the upper chambers of the heart. Though ASD is one of the most common congenital heart defects, the size of April’s hole was large.

If the holes are small enough, they can usually heal on their own. But with larger holes like April’s, they require surgical procedures – which April would eventually need.

At birth, April was breathing well and had no life-threatening symptoms due to the ASD, so the doctors referred April to a pediatric cardiologist.

“My cardiologist determined I would need surgery, but wanted me to grow as much as possible before doing that,” April said.

As a young girl, April remembers not being able to be as active as other children her age.

“I have a younger sister, and I remember I couldn’t keep up with her as far as physical activity goes,” April said. “I would experience shortness of breath, and my body wouldn’t allow me to keep up. I had to take it easy.”

Though April experienced shortness of breath with activity, she didn’t need to take any medication for her ASD. It was a waiting game to get the surgery she needed to repair her heart. 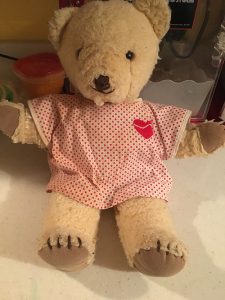 Finally, on June 2, 1986, at 4 years old, April’s cardiologist concluded that she was physically ready for her surgery that would take place at Norton Children’s Hospital in Louisville.

“On the morning of my surgery, my dad and I went to a beautiful Catholic church across the street from the hospital to pray,” April said. “He was understandably emotional, and I remember telling him ‘Daddy – everything is going to be OK. I’m going to live.’”

The doctors took a piece of muscle from another part of April’s body along with surgical mesh to mend the hole in her heart.

“I still have the teddy bear the hospital gave me, and it’s wearing a hospital gown with a zipper,” April said. “When you unzip it, the bear has a heart with stiches through it. It’s a special piece of that day I’ll have forever.”

After her surgery, April was able to lead a normal childhood. She played softball, but always knew her limits.

April continues to see a cardiologist on an annual basis. Over the last year, she has been experiencing variations in her pulse and is now on medication to help control it.

“This is the first generation where congenital heart patients are living longer lives,” April said. “We really have to be diligent in continuing to receive heart care throughout our lifetime.”

April and her 10-year-old daughter, Lexi, recently moved to central Illinois. April is going to continue her heart care at the Congenital Heart Center at OSF HealthCare Children’s Hospital of Illinois where there is a dedicated adult congenital heart program.

“If something doesn’t feel right, you need to be your own advocate,” April said. “As congenital heart patients, we don’t always have ‘normal’ symptoms. So you have to know what feels right for you and what doesn’t.”