Meosha Hilson was on cloud nine. On July 12, 2011, she had just given birth to her third child – a boy named Ka’Mario – at a hospital in Atlanta, Georgia. But two days after delivery, Ka’Mario’s lips and toes turned purple and his breathing was off.

Immediately, Ka’Mario was rushed to the Neonatal Intensive Care Unit at Children’s Healthcare of Atlanta. After a series of tests, doctors discovered Ka’Mario had a serious congenital heart defect call hypoplastic left heart syndrome, where the left side of the heart is severely underdeveloped.

“I was so upset about his diagnosis because there was nothing I could personally do for him as a mother,” Meosha said. “I had to leave it all up to the doctors to save him.” 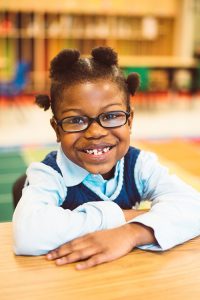 Hypoplastic left heart syndrome requires a sequence of at least three open heart surgeries to fix the functionality of the heart.

“A healthy heart typically has two upper chambers and two lower chambers called ventricles, which serve as the main pumping chambers,” said Dr. Mark Plunkett, congenital heart surgeon at OSF HealthCare Children’s Hospital of Illinois. “One of the ventricles pumps blood to the body while the other ventricle pumps blood to the lungs. With hypoplastic left heart syndrome, the heart has two healthy upper chambers, but only one fully developed lower chamber.”

The purpose of Ka’Mario’s first surgery was to get his single ventricle to do double the work – pump blood to both his body and his lungs.

“He was in the hospital for about three weeks after his first surgery,” Meosha said. “I had to learn how to put a feeding tube in him and had to help him get stronger for his next surgery.”

In October 2011, Ka’Mario underwent his second surgery in Atlanta.

The goal of this surgery was to take some responsibility off Ka’Mario’s sole ventricle. The ventricle continued to pump blood to his body. But to get blood to Ka’Mario’s lungs, the procedure bypassed the heart by taking the large vein that drains the blood from the upper part of the body and connected it directly to the arteries that go to the lungs.

Known as the ‘Rock Star’

By age 1, Ka’Mario was walking, talking and thriving.

“To hear my baby boy say ‘mama,’ hold a bottle and see him walk is indescribable because we didn’t know when or if he would be able to do any of that,” Meosha said. “His care team in Atlanta called Ka’Mario a rock star because of the way he progressed.” 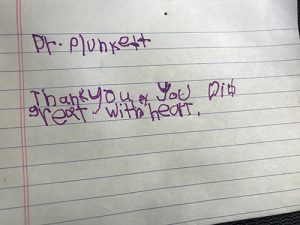 In March 2016, the family moved from Atlanta to Champaign, Illinois. A new city meant finding a new hospital for Ka’Mario to continue his treatment.

Ironically, Dr. Kirschbaum is good friends with Dr. Plunkett because they went through heart surgery training together at Duke University. Dr. Kirschbaum recommended the Clays seek treatment there.

Meosha is glad she listened.

Dr. Plunkett took the large vein that drains the blood from the lower body and connected it directly to the artery leading to the lungs.

“Ka’Mario did very well with his surgery,” Dr. Plunkett said. “I have seen him a few times since his surgery, and I am very pleased with how he’s doing. He’s an adorable kid. I actually still have a thank you card he wrote to me after surgery.”

Today, Ka’Mario is a happy-go-lucky first grader who loves school. He only requires a multivitamin and a baby aspirin daily for his heart, and regular checkups with Dr. Plunkett.

“You can’t get enough of Ka’Mario Clay – he’s such a sweetheart,” Meosha said. “I’m so thankful to the children’s hospitals in Atlanta and Peoria for all they have done for my son. I see a bright future for Ka’Mario.”