You often hear the phrases, “Family is everything,” or “That’s what family is for.” No two statements could resonate more for the Immke family of Pontiac.

Elaine Immke, 58, and Henry Immke, 77, grew up on each of their family’s corn and soybean farms near Pontiac. They are second cousins with their grandfathers being brothers.

But with a 20-year age gap, the two cousins didn’t become close until their passions for antiques and wood-working collided.

For the love of antiques

In 1988, while still maintaining their full-time jobs, Henry and Elaine opened a craft store in the old Pontiac City Hall named Country at Heart, selling a variety of wood art and antiques.

“Henry cut the wood, I carved it and he would put it all together,” Elaine said.

Four years after opening Country at Heart, they moved their shop to a different location in Pontiac, renaming it Hollyhocks and Rusty Buckets.

In 2006, the cousins decided to close their store and simply rent spaces at local craft stores to sell their goods. That decision would be for the best as the two would both battle health problems soon after, which ultimately brought them closer than ever before. 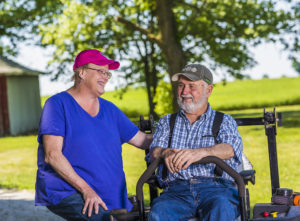 In 2009, Elaine developed breast cancer, which has since metastasized.

“Henry has been there for me every step of the way,” Elaine said. “He and I have lost both our parents, so we basically lean on each other for support.”

Five years later, Henry realized he had a health condition he was unaware of until one Sunday morning in 2014.

The two were in the barn on Henry’s family farm cutting wood when Henry suddenly started complaining of chest pain.

“It felt like someone was kneeling on my chest,” he said. “It was excruciating.”

In 2015, Henry underwent pacemaker surgery to help with the rate in which blood was being pumped from the heart.

“Dr. Rinker took time to explain what heart failure was to both Henry and I, so we could understand what to do to prevent any future heart episodes together,” Elaine said. “Henry is doing well, and we’ve been able to control it.”

“I believe Elaine has been one of the sole factors keeping Henry out of the hospital,” Dr. Rinker said. “She works closely with me to keep his heart failure controlled. Everyone benefits from a health care advocate like Elaine. In outpatient medicine, a patient’s care depends on the things they do at home and sometimes that’s hard to do alone.”

Elaine said it was never a question of if she would or wouldn’t help Henry stay healthy with his heart failure diagnosis.

“I’ve always been kind of a caregiver,” Elaine said. “I have a feeling the good Lord put me here for a reason, and I think it’s to be here to care for people. I need Henry for my health issues and he needs me with his. We keep each other in check.”

“She’s always there when I need her.”