Julia Biernot, MD, is a neurologist with OSF HealthCare Illinois Neurological Institute who specializes in Alzheimer’s, dementia and other memory disorders. She understands that the terms can be hard to differentiate for people, but the difference between the two is relatively simple.

Dementia is an umbrella term that describes a progressive decline in ability to function. Dementia is most commonly associated with memory loss, but there are other ways it manifests early on. According to Dr. Biernot, dementia may start with a decline in a person’s attention, language abilities or visual-spatial perception. Because two or more areas of brain function have to be affected for someone to be given a diagnosis of dementia, it is a condition that usually affects memory and other processing abilities of the brain. 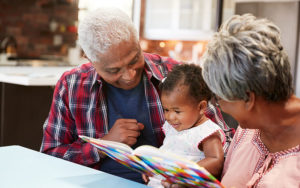 If you notice symptoms of memory loss in yourself or a loved one, speak with your medical professional.

A diagnosis of dementia can only be made when somebody who is familiar with the patient’s normal level of ability can provide information about the decline that has taken place. In-depth testing is also needed to make sure there is not a psychiatric illness or other medical explanation causing dementia-like symptoms.

So where does Alzheimer’s disease fit in here?

“Dementia is a broad state that can be caused by many different underlying reasons,” Dr. Biernot said. “But Alzheimer’s disease is the most common cause.”

Alzheimer’s disease is a neurodegenerative disorder in which a build-up of beta amyloid plaques and tau tangles in the brain prevent brain cells from functioning properly. Over 5 million people in the U.S. have it.

Alzheimer’s disease most often affects people over the age of 65. There are many risk factors for the disease, including age, genetics, female sex and race. Other risk factors may be modified, especially early on in life. These include diabetes, high blood pressure, high cholesterol, smoking, alcohol consumption, sedentary lifestyle, depression and others.

If you suspect that you or someone you know is suffering from dementia, it is important to find out the cause of the decline in mental ability, Dr. Biernot said. Perhaps it’s not dementia, but actually a reversible condition with similar symptoms. Your primary care provider can help you get started.

Dementia is not curable, but there are medications and treatment options that can impact the symptoms. If there is a neurodegenerative condition causing dementia, the treatment options open to you will depend on the specific cause, according to Dr. Biernot. It is also important to note that it is never too early to make lifestyle changes that may help to prevent or slow down the onset of dementia.