On January 2, 2011, Bob attended church with his daughter. “During Mass I started feeling progressively worse,” he said. “I was weak and dizzy. Every time I tried to stand up I felt wobbly.” Finally, he told his daughter that he needed help.

The doctor at OSF PromptCare told Bob that he had type 2 diabetes and needed to be admitted to the hospital. His daughter drove him to the emergency room at OSF HealthCare Saint Anthony Medical Center. A care team was already waiting for him. He was admitted to the hospital and stayed for two days while he received medication to help bring his blood sugar level within a healthier range.

A renewed commitment to wellness 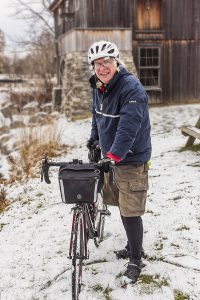 After he was discharged from the hospital, Bob made sure to followup with his primary care physician, Michael Kouimelis, MD, of OSF HealthCare Medical Group – Rock Cut Primary Care.

“Type 2 diabetes is a huge part of our practice,” Dr. Kouimelis said. “We’re very well trained in taking care of patients with diabetes and helping manage their condition with medication and lifestyle changes.”

When it came to making lifestyle changes, Bob didn’t miss a beat. “The biggest one I made is my attitude toward the disease,” he said. “Some people may push it off or try to pretend that it isn’t happening. I embrace being a diabetic. I read everything I could about diabetes so that I could better understand it. I realized that I could control the disease.”

Prior to his diagnosis, Bob already led a very active lifestyle. He frequently rides his road bike, cycling up to 4,000 miles each year. He also regularly lifts weights at the gym.

After his diagnosis, he maintained his commitment to fitness and started paying much more attention to the foods he ate.

“I count carbs. I understand the glycemic index and how quickly those carbs get into my bloodstream,” he said. “I check nutrition labels and pay attention to serving sizes.”

Successfully managing the day-to-day of diabetes 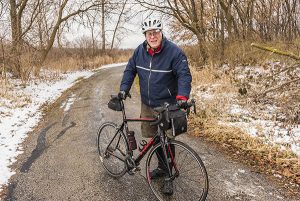 “When patients are as engaged in their own care as Bob is, it makes a huge difference,” Dr. Kouimelis said. “I can prescribe medicine and discuss different options for treatment, but managing diabetes is a whole new lifestyle. I can’t be there to tell patients what to do every single day so it makes a world of difference when they take ownership of their disease and make the necessary changes.”

Today, seven years since his diagnosis, Bob is feeling well and works hard every day to control his blood glucose levels with diet, exercise and medication. He follows up with Dr. Kouimelis every few months. “Diabetes is a damaging disease, but with knowledge about the disease and a healthy attitude, I won’t let it damage me,” he said.