E-cigarettes, devices that typically deliver nicotine, flavorings and other additives to users through an inhaled aerosol, are a rapidly emerging trend especially popular among youth and young adults. These devices are referred to by a variety of names, including “e-cigs,” “e-hookahs,” “mods,” “vape pens,” “vapes” and “tank systems.” E-cigarettes can also be used to deliver other drugs besides nicotine, such as marijuana. The use of these nicotine-delivery systems is commonly known as vaping. 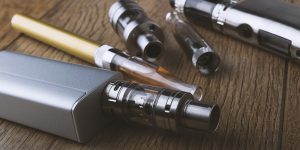 E-cigarettes are now the most commonly used form of tobacco by youth in the U.S. And dual use, or using both e-cigarettes and conventional cigarettes, is common among youth and young adults 18-25 years of age. Reasons reported by young people for using e-cigarettes include curiosity, taste and the belief that e-cigarettes are less harmful than other tobacco products.

What is in vaping and e-cigarette aerosol (juice)?

Vaping and e-cigarettes are still fairly new, and scientists are still learning about their long-term health effects. Here is what we know now:

Are vaping and e-cigarettes less harmful than regular cigarettes?

Yes – but that doesn’t mean e-cigarettes are safe. E-cigarette aerosol generally contains fewer toxic chemicals than the deadly mix of 7,000 chemicals in smoke from regular cigarettes. However, e-cigarette aerosol is not harmless. It can contain harmful and potentially harmful substances, including nicotine, heavy metals like lead, volatile organic compounds and cancer-causing agents.

E-cigarettes are not currently approved by the FDA as a quit smoking aid. The U.S. Preventive Services Task Force, a group of health experts that makes recommendations about preventive health care, has concluded that evidence is insufficient to recommend e-cigarettes for smoking cessation in adults, including pregnant women.

In 2016, a U.S. Surgeon General’s Report on e-cigarette use among youth and young adults became the first report issued by a federal agency that carefully reviewed the public health issue of e-cigarettes and their impact on our nation’s young people. Because most tobacco use starts during adolescence, actions to protect our nation’s young people from a lifetime of nicotine addiction is critical.