They all became nurses to help people. But none of them imagined any of this.

“Never in a million years,” said Angela Wissel, RN, who spent her nursing career in acute medical and home health settings before hitting the streets in 2015 as a Faith Community Nurse for OSF HealthCare Saint Francis Medical Center. 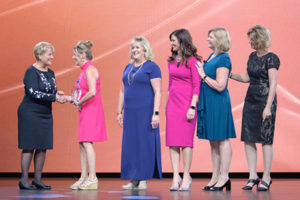 Angela is one of many Mission Partners in a project that started as an effort to reduce non-urgent visits to the emergency department. The project not only achieved that goal, but has expanded and continues to thrive because a solution was discovered in the heart of the OSF HealthCare Mission, serving the community with the greatest care and love by feeding people in need.

Then, their work earned a tangible prize. And not just any prize.

About 500 hospitals in the world are designated Magnet institutions by the American Nurses Credentialing Center. Only one of those each year wins the ANCC Magnet Prize Sponsored by Cerner. For 2019, in recognition of a nurse-led initiative that is transforming health care in Peoria’s poorest neighborhoods, that hospital is OSF Saint Francis.

Building trust with an open ear

Jo Garrison, DNP, NEA-BC, director of ambulatory patient care at OSF Saint Francis, has been a nurse for 36 years.

“In the past, a patient would be admitted into the hospital for diabetes, and we would spend a lot of time teaching the patient how to administer an insulin shot, check their blood sugars and make sure they understood the signs and symptoms.” Jo said. “But asking a patient if they had enough food at home was not part of the education plan.”

That would become a key question, though, as OSF Saint Francis tried to solve the dilemma of non-urgent use of the emergency department. A disproportionately large number of such cases in Peoria come from two ZIP codes – 61603 and 61605 – that encompass the city’s most impoverished neighborhoods.

Three Faith Community Nurses were hired in 2015 and assigned to embed themselves in those communities. They had expected to work mostly through neighborhood churches, but soon discovered that “God lives in the walls” of established organizations such as Dream Center of Peoria, Friendship House, Neighborhood House, Peoria Rescue Ministries, The Salvation Army and South Side Mission. Partnerships were formed.

The larger task remained daunting. The nurses had to establish trust that they were here to stay, that they would not just drop in for an event and then disappear. They addressed individual needs, informed residents of available medical services and helped arrange transportation to see primary care providers. A Care-A-Van mobile unit brought health care to where people lived.

And sometimes, caring meant just being there to listen.

“Not just a 15-minute session, but spend real time,” said Susie Smith, BSN, ambulatory nursing care manager at OSF Saint Francis. “When you have trust and time to build a relationship, and then you have God involved, you’re going to make a big difference.”

The more the nurses listened, the more they were staggered by what they learned.

‘God is working through our hands’

Food insecurity is defined as lacking food or the resources to obtain food – or fearing that your food supply will run out before you can afford to buy more.

“Being a native Peorian, I believed we could do better than this,” Jo said. “We noticed a lot of food banks, but they lacked access to routine fresh fruit and vegetables. We needed to identify gaps in care, and we realized part of the gap was teaching the importance of fruits and vegetables are in a healthy diet.” 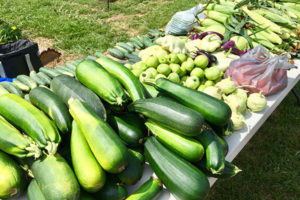 One way they tackled the problem was with the St. Ann’s Garden of Hope – an idea so far outside the box that it was hard to believe what was being proposed.

“I don’t think the chief nursing officer ever imagined reading a request to hire a gardener to plant fruit and vegetables,” Jennifer said. “But we found ourselves in the market to grow produce so that we could distribute it to people who needed it.”

Michael Brooks was hired to manage the garden. A small plot next to St. Ann’s Catholic Church on Peoria’s South Side was first tilled and planted in 2018. In 2019, with an assist from the City of Peoria, the garden expanded to 2.2 acres.

With the help of some 400 volunteers and cooperative ventures with public and private entities, the garden became a hub of activity. Neighborhood residents participated in the gardening. School classes brought children to learn about gardening, exercising and healthy eating.

By mid-October, 9,643 pounds of fresh produce had been harvested and delivered to the community in 2019.

“It’s been unbelievable,” Jo said. “It’s like God is working through our hands.”

The overall program for which OSF Saint Francis won the Magnet Prize has six facets: 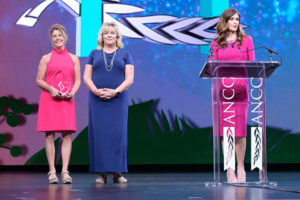 The effectiveness is seen in the numbers.

Plans for the $50,000 prize money call for a greenhouse, in which food can be grown year-round, and a covered shelter, where education programs at the garden can be shaded from the summer sun.

Winning the Magnet Prize is a big deal for a lot of reasons, but winning this or any other award was never part of the agenda. The nurses at OSF Saint Francis took on this project because it was the right thing to do, and it helps fulfill the Mission of The Sisters of the Third Order of St. Francis, dating to 1877.

“When I started out in nursing, I thought it was all about taking care of sick people in the hospital,” Jennifer said. “But we don’t do the greatest care and love only with a stethoscope and new treatments. This is outside the traditional brick and mortar of a hospital or clinic. This is population health at its best, taking care of people by providing basic needs so they don’t become sick. We can provide the greatest care and love just by feeding people in need.”