Jenna Hall says her 17-month-old son is one of the lucky ones.

“He’s overcome a lot,” said Jenna, who lives in Mahomet, Illinois, with Elliott and her husband, Grayson. 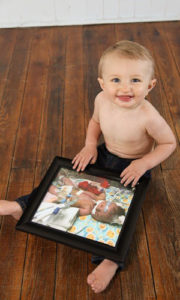 Jenna works in ultrasound services at a hospital near her home. When she was 16 weeks pregnant with Elliott, an ultrasound technician in her office practiced on her to find routine fetal heart images. At one point, the tech left the room and brought in the head technician.

“They didn’t tell me anything,” Jenna said. But Jenna would soon learn the technicians saw an issue with the baby’s heart.

When she was 20 weeks pregnant, an ultrasound revealed the baby possibly had a heart defect. A follow-up fetal echocardiography (echo), which looks at the structure and function of the unborn child’s heart, was performed.

“That’s when they found it was a coronary artery fistula,” Jenna said.

Dr. Mark Plunkett, chief of pediatric cardiac surgery at the Congenital Heart Center at OSF Children’s Hospital, said a coronary artery fistula is a very rare defect that accounts for approximately 0.2 to 0.4 percent of all congenital heart defects.

“The defect is when the coronary artery incorrectly connects to a heart chamber or different blood vessel causing abnormal flow to that structure and results in stealing blood from the downstream coronary artery. This can cause the heart muscle to be deprived of normal blood flow and oxygen.”

Jenna began seeing Dr. Jitendra Shah, a cardiologist with the Congenital Heart Center who held hours at a clinic near her home.

“Dr. Shah told us the baby probably would need a cardiac catheter procedure to plug the fistula,” Jenna said. “Once, he mentioned the need for open heart surgery, but said that likely wasn’t going to be the case.”

Preparing for the birth

For the remainder of the pregnancy, Jenna had follow-up echos at weeks 26, 29, 32 and 36 through the Congenital Heart Center’s Fetal Heart Program.

During the pregnancy, Jenna reached out to her cousin, whose daughter was born with hypoplastic left heart syndrome and had surgery at OSF Children’s Hospital.

“It was great to be able to talk to someone who had been through something similar,” she said.

At 39 weeks, Jenna gave birth to Elliott on July 25, 2017. And while she was induced, the delivery was normal.

“They induced so the congenital heart team was available because Elliott’s condition was so rare,” Jenna said.

“This was picked up at 23 weeks into the pregnancy – that’s very early and it really points out how far we’ve come in prenatal diagnostics,” he said. “Back even 15 years ago, detecting this in the fetal stage was unheard of.

“Today, we have a fetal cardiology clinic almost weekly to detect heart defects earlier and earlier in pregnancy. This is great because by the time the baby is born, we know what problems we’re facing and we’re ready,” Dr. Plunkett said. “With Elliott, the only question was how soon he would need some type of intervention.”

To wait or not?

The plan, Jenna said, “was to go in with a cardiac catheter to put a plug in the fistula, but they wanted to wait until he was a little older.”

So, after two days in the neonatal intensive care unit (NICU), the family prepared to possibly go home.

“I was waiting to be discharged since I was still an inpatient following the delivery and I got called that Elliott had taken a turn for the worse,” Jenna said. “Dr. Plunkett came to my room and told me they were taking Elliott for emergency open heart surgery. I had five minutes to go see him and hold him and then they took him to surgery right away.” 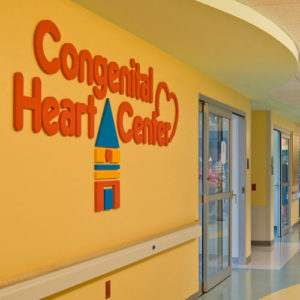 Jenna and Grayson were told the surgery would take six to eight hours because it wasn’t clear what Dr.  Plunkett would need to do or if Elliott would be put on cardiopulmonary bypass, which is when a machine temporarily takes over the function of the heart and lungs during surgery.

During the surgery, Elliott was put on cardiopulmonary bypass and Dr. Plunkett was able to close the fistula. Although he’s repaired coronary fistulas in the past, he said it was the first time he operated on a newborn with this condition.

“The surgery only took two hours and Dr. Plunkett came out and told us everything went well,” Jenna said. “It was such a relief.”

For four days following the surgery, Elliott’s chest was left open to accommodate swelling. On day four, Dr. Plunkett closed up the chest and put another stitch in the fistula on the outside of the heart to close it up a little bit more, Jenna said.

On day five, the doctors told Jenna and Grayson the emergency surgery was needed because Elliott had suffered something akin to a heart attack and lost all function in the right ventricle.

Dr. Plunkett said a heart attack is caused when someone has a blockage in a coronary artery preventing blood flow. In Elliott’s case, there wasn’t a blockage but a hole siphoning the blood from flowing downstream.

“The heart muscle was dying,” Dr. Plunkett said. “He got into trouble pretty quickly.”

Jenna and Grayson were spared those details on the day of the surgery.

“If I had known that,” Jenna said, “I don’t know if I would have taken the time to hold him knowing that he was suffering – I would have wanted them to take him right to surgery.”

On day eight in the pediatric intensive care unit (PICU) following surgery, Grayson was holding Elliott when his heart rate skyrocketed to 268 beats per minute.

“They told us he was experiencing supraventricular tachycardia. Here we thought he was on the home stretch, and that happened,” Jenna said.

Medication was given to stop and restart his heart, which then caused his heart rate and oxygen saturation level to normalize. Additional medication and time helped Elliott’s body start adjusting to his condition.

After 14 days in the PICU, the family went home.

“I sat in the backseat with him the whole ride home,” Jenna said. “We were pretty nervous.” 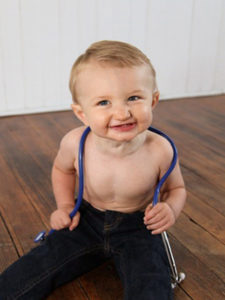 Following the surgery, Elliott was on daily injections of a blood thinner.

“I had to give it to him two to three times a day. Here I was causing him more pain – it was anguishing,” Jenna said. “Those injections stopped after six months. With those daily injections and lab work every week for six months, he had hundreds of needles poked at him. His little thighs were so bruised.”

Today, Elliott goes for a checkup every six months with cardiologist Dr. Ty Hasselman and gets an echo and an EKG.

“He takes a baby aspirin every day. Other than that, he isn’t restricted from activity or anything,” Jenna said. “He’s a pretty normal kid. As far as we know he won’t need any future surgeries. Elliott is probably one of the lucky ones. We’re pretty lucky on that end.”

Dr. Plunkett is a bit more emphatic about the outcome and Elliott’s future.

“He’s fixed. We intervened quickly and were able to close the fistula and recover his heart muscle. His heart function is now normal. He has a mended heart and he probably won’t have any issues in the future,” he said. “There are some heart defects we can fix and the patient has a normal life expectancy. I like to call this an 80-year win. It’s very gratifying when you have a situation like this. He should have a normal, active and healthy life.

Jenna can’t say enough about the compassionate care Elliott received at the Congenital Heart Center, and the care everyone provided her and Grayson.

“Gosh, the whole experience – we had amazing care. All the nurses were great. They were so great explaining everything to us – very patient with us about answering our questions,” she said. “I can’t thank the doctors – Dr. Plunkett – enough. We had a tremendous outcome and have a happy toddler running around today.”