Ever since she was a child visiting her mother at work in the hospital, Kris Manalang knew she wanted a career in health care.

“I already wanted to be a nurse. It was my way of getting in the door,” she said.

Soon after Kris was accepted to Saint Francis Medical Center College of Nursing, she started working as a patient care technician, or PCT, in the medical-surgical department.

As a PCL Kris supported the nursing staff, but she’d have the opportunity to work more directly with patients as a PCT, something she feels gave her a head start as she worked her way through nursing school.

“Working as a tech really helps you develop your people skills. It helps with time management,” Kris said. “I noticed that in nursing school a lot of my peers would be scared to touch a patient, but that was just second nature to me because I had been doing it for so long.” 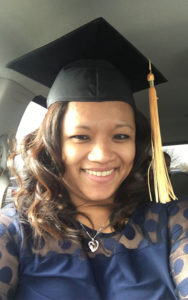 Kris continued working as a PCT as she worked toward becoming a registered nurse. She took classes during the day and worked evening and weekend shifts in the hospital – a schedule she admits was challenging, but manageable with the support of her family.

“My kids understood that the next couple of years was going to be really tough. They were in sports and speech. I couldn’t be there for every single event, but they understood that,” she said. “It makes me appreciate everything that we can do together now.”

She used a planner to organize everything she needed to get done at home, work and school.

“It made it easier that school and work were in the same core location. There were days I would get up and go to school, and then have two or three hours before I went to work that I could study in the library,” she said.

Kris found her colleagues and classmates were an excellent resource, whether they were younger, more traditional students or working their way through school like she was.

“I didn’t realize until I started as a nursing student how many resources you have to help you to succeed. Being a nurse opens up so many different avenues for you,” Kris said.

Since completing her licensing earlier this year, Kris has been working as a med-surg RN in the same hospital where her mom worked – OSF Saint Francis.

“It’s incredible to see their progress on a daily basis. It’s really uplifting to know you had a hand in that,” she said.

She chose to work in the same department she did as a PCT because she loves the variety and teamwork, but she knows that being an RN gives her many other options when she’s ready for a change.

Being a nurse is a rewarding career for Kris. She loves getting to know her patients, many of whom stay in the hospital for several days while recovering from surgery.

“All of the hard work and everything that you have go through is so worth it at the end. It’s hard and everybody struggles, especially when they first start out,” Kris said.

“Once you have your degree and you have the ability to take care of a patient, it’s the patient telling you, ‘Thank you for everything you’ve done for me,’ – that is what is telling you you’re doing a good job.”

Learn more about being an OSF HealthCare RN.