A desire to help people drove Brian Woolard into a second career as a nurse. An “underutilized” OSF HealthCare program helped equip him to provide patients with even greater care.

Brian is an orthopedics nurse at OSF HealthCare Saint Francis Medical Center in Peoria. After 14 months of online courses, he earned his Bachelor of Science in Nursing (BSN) degree in January 2018. He accomplished the RN-to-BSN journey with tuition assistance and other support available to OSF HealthCare Mission Partners.

“It’s priceless,” Brian said of the program. “I was able to cut down a third to a half of my loan. I think a lot of people just don’t realize the assistance is there. I think it’s way underutilized.” 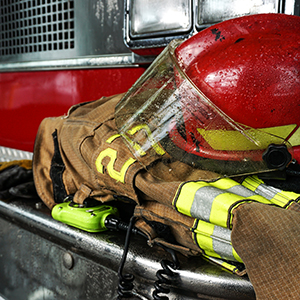 Brian knew from a young age he wanted to help people.

When he was a teenager, a paramedic ambulance crew often hung out near his home. He would watch them interact, and his interest was piqued.

For 20 years, Brian served as a fireman and paramedic. During that time, though, he increasingly felt himself being called into nursing.

“But I knew I couldn’t go to school on a fireman’s schedule,” he said.

In 2013, Brian took early retirement and joined OSF Saint Francis as a patient care technician, intent on becoming a nurse.

OSF HealthCare offered the means for him to work full-time, become an RN by pursuing an associate degree in nursing, then get his BSN.

The support for Brian’s quest was more than financial. Early on, he sat down with his manager, Nancy McCabe, and mapped out a plan. His supervisor, Jena Slotter, was also supportive. Over five years, they accommodated his class schedules and encouraged him as he went from technician to RN to BSN.

“I don’t think I could have worked full time and gone through either of the programs, associate or bachelor’s, without that support. No way,” Brian said. “With that and the educational assistance, it’s just a fantastic program.”

Brian had used the program to earn his associate degree and become an RN, but it was always his goal to pursue the bachelor’s as well.

The benefits of a BSN extend far beyond the individual nursing student.

“When you’re first starting out as a nurse, especially without that bachelor-level knowledge, you’re worried about task-oriented stuff,” he said. “Being task-oriented, there are some things you don’t think about. You’re busy checking off tasks, like giving medication or doing a dressing change.”

With his advanced studies, Brian gained experience in evidence-based research that helps him understand why patients present certain symptoms and better serve their needs. He also built management skills.

“I think some people don’t go for a BSN because they don’t see themselves working in management,” he said. “But it’s not all about that. The things I learned, it’s truly about managing that patient in front of you and better managing a group of patients.”

Learn more about the benefits of being an OSF nurse.