Andres Maldonado, MD, knew from a young age he was interested in medicine, but he didn’t discover his passion for neurosurgery until he was in medical school. 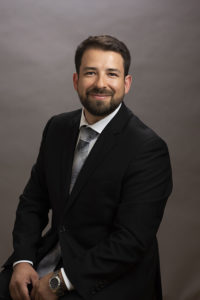 “When I was six or seven years old I was already saying that I wanted to be a doctor. My mom would always see me playing with plastic hearts, and I was always interested in anatomy and biology – even before I studied those subjects in school,” Dr. Maldonado said.

Fascinated by science and interested in working with his hands, he pondered becoming a cardiologist or maybe a general surgeon. During a rotation in the emergency department in his fourth year of medical school, Dr. Maldonado encountered a patient who would change the trajectory of his career.

“I saw a construction worker that had fallen from a two-story building,” he said.

The man was in a coma, struggling to survive.

“The neurosurgeon came in. He was the boss in the ED. He said the man needed surgery, and asked the medical students who wanted to assist. I was the first one who jumped in front of everybody and said, ‘I want to do it!’” Dr. Maldonado said.

The neurosurgeon treated a large epidural hematoma, and Dr. Maldonado got his first glimpse into the complex anatomy of the skull and brain.

But even more significant was what he saw after the surgery.

“When he woke up, he was basically the same person he was before the fall. This was a patient in a coma who was very close to dying. That was something that really hit my heart and made me say, ‘I want to be able to do this,’” he said.

After that experience, Dr. Maldonado was in the operating room nearly every day, learning everything he could about neurology and neurosurgery.

Finding a path to neurosurgery

Although he was born in the U.S., Dr. Maldonado spent most of his childhood in his parents’ native country of Ecuador. He attended medical school in Quito, the capital city, but there were no neurosurgery residency programs in the country. He knew he wanted to continue his education in the United States.

Neurosurgery residency programs are extremely competitive. Each year, only a little over 200 spots are available to first-year residents nationwide. Dr. Maldonado knew as a graduate of a foreign medical school, he would need a particularly impressive application to secure one for himself.

“You need not only very high scores, but you also need to do something extra, like research,” he said.

After a postdoctoral fellowship, during which time he studied spinal cord injuries, Dr. Maldonado began a general surgery residency. After developing his skills and his résumé, he became a junior resident in the neurosurgical program at Cleveland Clinic, where he eventually completed his residency in neurosurgery as well as fellowships in functional neurosurgery and epilepsy surgery.

“I was blessed to continue my training in Cleveland. I knew I wanted to go into the field of functional neurosurgery because I had seen the outcomes,” he said.

Functional neurosurgery is a subspecialty that involves precise surgical treatment of the structures of the brain to change how the brain functions. Functional neurosurgeons can identify the specific part of a brain that isn’t functioning properly and stimulate or deactivate that structure to alleviate symptoms.

In short, it’s a way of turning off the parts of the brain that are causing symptoms like seizures, tremors or even psychiatric disorders – a life-changing treatment for people struggling with diseases such as epilepsy, Parkinson’s disease, dystonia, Tourette syndrome or obsessive-compulsive disorder.

“You have these patients who have severe disabilities because they have diseases of the brain. They cannot live a decent life. They have to quit their jobs because they are disabled. The treatments we offer can change that, and make it easier for that person to cope with the disease and continue with their life,” Dr. Maldonado said.

“It really touches your heart a lot. I am passionate about seeing a patient improving, and I would do anything I can to help improve their lives.”

“I’m someone who really believes communication is the most important tool a physician has to provide adequate treatment. I think the most important thing for my patient to know about me is that I am someone they can trust. I’m someone who will listen. I want to be able to provide this type of treatment, so they can accomplish their goals and get back to the lives they’ve been waiting for. And I have the expertise to give them that.”