Supporting people at the end of their lives is an important part of Kayla Glisan’s job as an RN case manager with OSF Hospice.

Working as a hospital nurse, Kayla saw firsthand how some people struggled to control health issues near the end of their lives, and decided to pursue an opportunity in home care to better manage those difficulties outside of the hospital.

“It ended up being a really good fit because I am so passionate about it,” Kayla said. “I can’t imagine doing anything different than hospice work.” 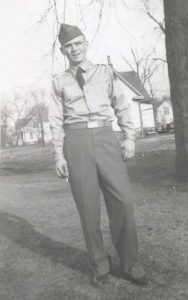 Hospice is for patients of all ages with a life-limiting illness who decide not to pursue curative or life-prolonging treatment and instead want to focus on comfort care.

The emphasis in hospice care is on quality of life – as defined by the person receiving care. When Kayla first meets with an individual who has chosen hospice care, she asks what they want during their final weeks or months.

“If there’s something that they want to do – if they want to make it to a wedding or a graduation – we try to make that happen if that’s at all possible,” Kayla said.

One such conversation happened with Richmon Purl. The two met at Richmon’s Galesburg home in August 2016. Right away, Kayla became his main nurse, spending several hours each week with Richmon.

“We were friends. The visits I did were enjoyable. It’s more than just talking about health issues. There’s a lot of other things that are important to focus on,” Kayla said.

One day, Richmon’s daughter told Kayla about a once-in-a-lifetime opportunity for Richmon. A veteran of the Korean War, he had been invited to go on an Honor Flight trip to Washington, D.C. But because of his deteriorating health, he needed a nurse to travel with him.

Kayla sent an email to her manager explaining the situation and heard back the next day that not only would OSF HealthCare allow her to take the trip, the organization would pay her way.

A trip to remember

In October, Kayla and Richmon, along with a host of other veterans and volunteers, including Richmon’s grandson, James Purl, flew to the nation’s capital.

“I think he thought it was really neat. He was like a kid. At certain memorials he would be like ‘I want a picture right next to this word.’ His grandson was really grateful, too, that someone was able to come with him,” Kayla said.

When Richmon passed away three months later, he left Kayla one of his most prized possessions — his Bible.

“I still have it,” Kayla said.

For Richmon’s family, the trip was a final way to honor the man who had served his country. For Kayla, it was a chance to give her friend a happy memory during a difficult time.

“Something to look forward to is very important to our patients. The more we can do with our patients to create good memories, I think is really wonderful.”