When Bryan Aberle delivered a load of gravel to Roger Scherr’s farm just outside Fairbury in late November of 2010, neither of them knew that day would change their lives forever.

At the time, Bryan and Roger were only cordial work acquaintances. Roger had end stage renal disease and had been undergoing nightly peritoneal dialysis treatments for nearly six months, which robbed him of all leisure and hindered his plans for the future. 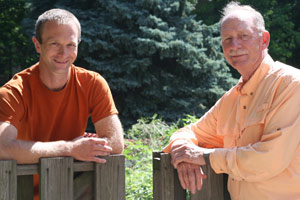 “He looked like a skeleton,” Bryan recalled. “I didn’t really know him well at the time. I’d heard he needed a transplant, but didn’t think about it much. Seeing him that day like that really hit me. I felt compelled to do something about it. ”

After a week full of thought and prayer, Bryan gave a nervous phone call to the Scherrs, officially offering to donate his kidney. Because kidney transplants are usually best matched from relatives, both men knew that the odds weren’t in their favor.

“I remember thinking, ‘Here’s a young man who doesn’t really know me, but he’s willing to give a part of his body to me.’ It’s a humbling experience— just the offer itself is an amazing gift and a testament to the type of person Bryan is,” Roger said.

When the results of the blood work came back with an almost-perfect match, everyone was shocked—except Bryan and Roger.

For them, their compatibility only confirmed that their experience together was meant to be. At the Transplant Services office at OSF HealthCare Saint Francis Medical Center, they became a popular conversation topic. Rarely do results come back so promising, let alone from two men who were once strangers.

After months of testing, delays, and measurable patience from everyone involved, Bryan and Roger were cleared for donation and found themselves being prepped for surgery on July 18, 2011.

“Bryan was the only one of us who slept through the night before surgery. No one—not me, not our wives, or any of our family members slept.  But Bryan? He slept like a baby,” Roger joked.

The donation turned out to be an immediate success. Within the first 24 hours after surgery, Roger’s new kidney began functioning significantly better than most kidney transplants.

Even during the recovery period at the hospital, Roger and Bryan never lost their playful and fraternal sense of camaraderie.

“I was annoyed that Roger made it out of bed before me. I was only 29, and he was 61. I should have been able to recover faster!” Bryan said.

Within a couple of days, both men were back at home to finish the recovery process. Within a couple of weeks, Bryan was back at work and Roger’s kidney function had returned to healthy levels. Fast-forward to today, and their lives have been remarkably transformed. Not only has their relationship bloomed from casual acquaintance to deep friendship that mirrors only that of a father and son, but because of Bryan’s donation, Roger is able to once again live a fully functional and happy life.

“I just went through life day by day. Planning my farming future was hard. That’s the hardest thing—you don’t know about your future. It’s scary knowing that you’re going to be tied to a machine the rest of your life,” he said. “Bryan saved my life.”

As for Bryan, he describes his decision as incredibly rewarding. “If I was asked to go through all of this again, I would. Everyone deserves a good life and good health, if possible. Organ donation is one of the easiest ways to make life better for someone— forever.” 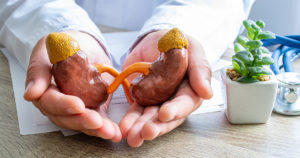 Together, Bryan and Roger work with the community to raise awareness about the benefits of organ donation. In 2012, they spoke at the National Kidney Foundation Education Day at Bradley University in Peoria, Illinois.

“I’d like to hear someone say, ‘Because of your story, I donated a kidney.’ That’s what I want,” Roger said.