His promotion to commander came as a bit of a surprise. Doug Bowers never figured on a lifetime of military service. Nor was a nursing career in his original life plan. But …

Find your next Mission

He smiled and put his hands together, interlocking the fingers.

Today, Doug is a registered nurse and manager of clinical surgery at OSF HealthCare Saint Francis Medical Center in Peoria. He also is a lieutenant colonel for the Peoria-based 182nd air wing of the Air National Guard.

And this month, as we celebrate Veterans Day, Doug assumes duties as commander of his Air Guard unit’s medical group.

“You always want to aspire to become a commander,” Doug said. “But if someone had asked me even five years ago if I thought I would make commander, I would have said, ‘No, I probably won’t see that position.’ Traditionally, that has been looked at as a physician’s role, not for a nurse. I’m thankful for the opportunity.”

That opportunity arose from decades of preparation, even if it wasn’t his goal from the start.

What Doug wanted as he grew from a teenager to young adulthood was to serve people and his community. He just wasn’t sure exactly how to accomplish that. 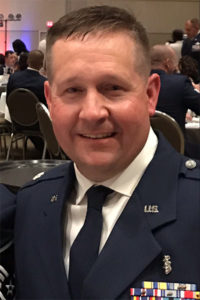 His first inclination was toward law enforcement, and he pursued that course of study at Illinois Central College. Doug’s father had served in the U.S. Army, so he also believed it was his duty to enlist in the military.

When he talked to the National Guard recruiter, Doug was told there were no openings for security forces. Before disappointment could set in, though, the recruiter told him the Guard needed medics.

Basic training in San Antonio was followed by tech school in Wichita Falls, Texas, and clinical rotations in Montgomery, Alabama. Then he was sent back to Peoria; a changed man, so to speak.

“I ended up enjoying the medical side. Then I found out that if I was a nurse, I could become a commissioned officer,” Doug said.

Because he had signed on for six years with the Air Guard, Doug was entitled to education benefits. He applied them to the Saint Francis Medical Center College of Nursing, became an RN and started working in the operating room at OSF Saint Francis. He never left.

About a year after beginning his full-time nursing career, Doug was commissioned as a lieutenant in the Air Guard. That was five years into his initial commitment.

In February 2020, Doug will mark 28 years of military service. 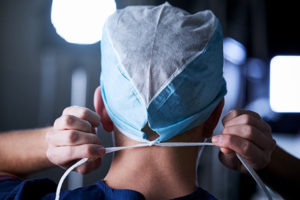 With the Air Guard, Doug has been activated for flood duty in Southern Illinois, and he has gone on humanitarian missions to Honduras, Paraguay, Germany and other posts as part of annual training. He has not yet been called into a combat zone.

With OSF Saint Francis, he has watched with some degree of awe as surgical procedures have transitioned to the use of robotics.

“It’s pretty amazing,” Doug said. “It’s impressive work we get to do. As a team, we literally are saving lives.”

Amazing also would be a pretty good word to describe Doug’s dual career life. Military service, nursing and his leadership in both fields really have gone hand in hand.

“OSF takes care of its veterans. It’s been a very good partnership.”

If you are a veteran of military service, find your next Mission at osfcareers.org.