Rashes in children, especially toddlers, can be common. And while a rash can often be harmless, it can sometimes indicate a more serious condition, so parents often seek medical attention when mystery spots appear on their little one. 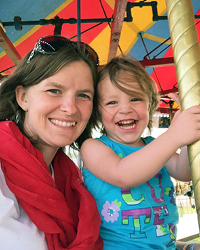 Kaleena Conrad of Galva, Illinois, a mom of two who works as a middle school teacher, recently noticed a rash on the arms of her 2-year-old daughter, Grace. It was a Wednesday morning and she wasn’t too alarmed as her daughter had no other symptoms. But later that evening the rash seemed slightly more pronounced and warm to the touch. Since it was around 7 p.m. and the nearest OSF PromptCare location was about 50 minutes away, Kaleena decided to request an online doctor visit at www.osfoncall.org.

After registering, a doctor contacted her via Facetime on her iPad in less than 20 minutes.

“He chatted with us for quite some time, was very thorough and polite. He seemed genuinely concerned with Grace’s condition, and being able to help us,” Kaleena said. “He asked about Grace’s health history, and what we had been doing throughout the day, and if we had done anything out of the ordinary.”

Based on the toddler’s symptoms, the doctor determined the rash wasn’t serious, and provided a couple possible explanations for its cause. He advised Kaleena to reach out to her family doctor if the rash changed or spread.

The rash did spread the next day, so Kaleena took Grace for an office visit on Friday. Her primary care physician believed it was likely a virus that caused a skin breakout, and no medication or treatment was necessary.

Kaleena continued her watchful waiting to see if the condition cleared up. By Tuesday of the following week, Grace was back to her usual self, playing with friends at her brother’s baseball games and swimming in the backyard pool.

Kaleena said she was glad to have the online visit as an option.

“The doctor was very thorough and truly listened to my concerns about my child,” she said, noting that the doctor from the online visit called her by telephone five days later to inquire about her daughter’s condition.

“Overall, OSF OnCall was a great experience and gave me peace of mind in an uncertain situation,” Kaleena said. “I would definitely use it again.”