Dr. Larry Stalter can thank a patient for igniting his passion for collecting old medical instruments, books and equipment about 40 years ago. 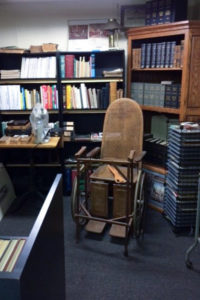 “When I first opened up my practice, a patient brought in an old instrument. He knew it was somehow medical related and asked me if I wanted it,” Dr. Stalter said. “That sort of whetted my interest. I started looking for things, collecting things and soon I had boxes of stuff. I bought things at auctions and flea markets and there have been families of physicians who had passed and they would ask if I wanted some of the things the doctor had.”

He had amassed so many items that Dr. Stalter opened up the Lucy Hahn Memorial Medical Museum in 1995. Named for a friend who died of cancer, the museum is located on Hack Street in Cullom, Illinois, where Dr. Stalter lives with his wife, Marcia, a retired registered nurse. It is open by appointment only by calling Dr. Stalter at OSF Medical Group – Primary Care in Flanagan where he practices. That number is (815) 796-4591.

“The building is like 60-feet by 25-feet and it’s filled up. The collection is substantial,” he said.

His collection includes a library of about 1,200 books dating from 1791 through the 1950s, instruments, equipment, nurses’ uniforms and capes, thousands of medicine bottles, old microscope slides, journals, letters and more.

“There’s a little bit of everything,” Dr. Stalter said. “One of my prized possessions is a journal from a doctor who practiced in northern Illinois between 1860 and 1900. He would write down the patients he saw and what he’d charge – like a quarter. But in the margin, he’d also write about what was happening on a particular day, like heavy snow fell. On April 15, 1865, he wrote, ‘Abraham Lincoln was assassinated today.’ I always felt that connection was very interesting.”

A nod to the past 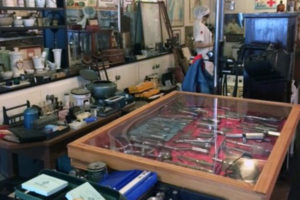 The collection also is a way to pay homage to early practitioners.

“It’s interesting to see where we’ve come from and it’s also interesting to see how good some of these older physicians were at physical exams and what was going on in the inside of person’s body without the benefits of X-rays and blood tests,” he said. “Now we can get a chest X-ray or a CT scan, but they had to rely on their senses and their stethoscope to figure out what was going wrong with an individual. It really shows the evolution of medicine.”

Another cherished possession Dr. Stalter purchased on eBay is an autographed photo of the Mayo brothers who started the Mayo Clinic. 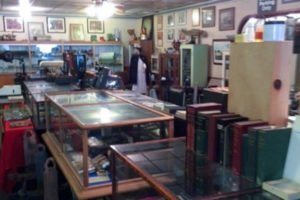 “I don’t sell anything, partly because a lot of things I have were given to me and I wouldn’t feel right about selling those things,” he said. “The people who find the collection most interesting are nurses and doctors. Kids ask good questions – they’re always really interested in those sort of things.

“We’re glad to show it to anyone if they want to see it,” Dr. Stalter said. “I’m glad to open it up whether it’s for a school group or organization.”