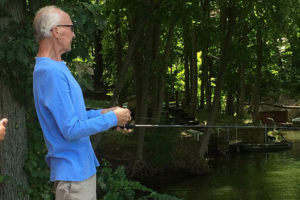 Harry Alexander quit smoking in 1996, but his breathing didn’t improve. That can happen when you start smoking in your teens and maintain a two-packs-a-day habit for more than 30 years.

The damage all that smoke did to Harry’s lungs was severe. He didn’t get lung cancer, but in 2015, he was diagnosed with chronic obstructive pulmonary disease (COPD).

By the spring of 2019, Harry couldn’t push a lawn mower across his yard even once. He couldn’t take a walk around the neighborhood with his 2-year-old grandson. Even eating wore him out, as he had to stop to catch his breath after chewing a single forkful of food.

“You’re fine. Do anything you want,” Dr. Whitten told him.

“So I went home and cut the grass,” Harry said.

Illinois is the only state in the upper Midwest with health care facilities offering bronchoscopic lung volume reduction. OSF Saint Francis is the only hospital in Illinois outside of Chicago performing the procedure.

It’s a life-changer for people with COPD, which is the No. 3 cause of deaths in U.S. adults.

When you have COPD, your airways and the air sacs in your lungs become inflamed, clogged with mucus or collapse. Once damaged, the air sacs (called alveoli) cannot be repaired and stop functioning. Instead of oxygen being pumped into your blood and being exchanged for carbon dioxide, the oxygen becomes trapped in the diseased section of your lung. The resulting hyperinflation reduces your capacity to breathe.

“These people are gasping for air,” Dr. Whitten said.

Medications, delivered through inhalers, and oxygen treatments can help. But as the condition worsens, more dramatic steps may be required.

For decades, lung volume reduction involved major surgery. A thoracic surgeon would cut open the patient’s chest and remove damaged sections of lung. The surgery requires a lengthy hospital stay, carries the risk of infection and leaves patients in considerable discomfort while they recover.

For more than 20 years, Dr. Whitten and one of his partners, William Tillis, MD, have been involved in national research to figure out how to simulate the surgery by using a tube called a bronchoscope. The tube goes through the mouth into the airways, and tiny, one-way valves are placed in the damaged lung. The valves push out mucus and gases and stop fresh oxygen from reentering and getting trapped.

The procedure takes about 40 minutes. The patient must stay in the hospital for three days, to monitor them in case the lung collapses. A collapsed lung will lengthen the hospital stay, but it won’t affect the prognosis for a full recovery and the improved breathing capacity, Dr. Whitten said.

To be considered for bronchoscopic lung volume reduction, a patient first must:

“When they get to the pulmonary rehab, it’s brutal because they’re sucking air,” Dr. Whitten said. “So when they do that and get through it, you know they’re motivated.”

Being able to offer and perform bronchoscopic lung volume reduction is a game-changer for pulmonologists, too.

“It’s exciting, because when you look at COPD, it’s the main disease we treat; that and lung cancer,” Dr. Whitten said. “We don’t see many very happy people. This procedure actually gives us something we can offer that significantly benefits patients.” 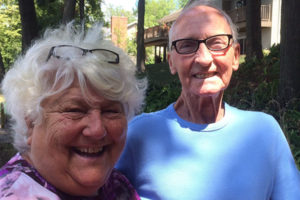 Dr. Whitten said patients can expect a 20% improvement in their ability to breathe.

Harry said the improvement feels more like 50%. Now 75 years old, he hasn’t breathed so easily in more than 40 years.

“After a while, I just took COPD for granted,” Harry said. “Now, I pretty much take breathing for granted.”

A few months ago, his 2-year-old grandson Andrew would beg Harry to pull him around the neighborhood in a toy wagon. Harry would put him off with promises to do it tomorrow, which would never come.

Today, when Andrew asks for a ride, Harry responds with an enthusiastic, “Let’s go!”

Dr. Whitten said Harry’s wife, Terry, got so concerned about his activity on the first day home from the hospital that she called the doctor.

The Alexanders live on a lake in a rural subdivision near Peoria. The walk down to the lake and back up to the house is a steep trek. But Harry immediately clambered down to the dock and back, walked around the house, and then he mowed that yard.

“He was going crazy,” Terry said. “It was the coolest thing.”

Well, maybe. Or it’s possible she hasn’t seen anything yet.

If you have COPD, talk with your primary care provider to set up an appointment with an OSF Saint Francis pulmonologist.