You hear many say, “Every pregnancy is different.” When a couple decides they want to start a family, there are always many unknowns. Will the mother have a bout of morning sickness? Will the baby be a boy or a girl? Will the labor be long or quick?

For Lindsay O’Rourke, of Pekin, her pregnancy had been pretty smooth and uncomplicated. That is until she reached 23 weeks, four days – a day Lindsay, and her husband, Brendan, could have never predicted and will never forget.

In June 2016, Lindsay thought she was potentially in preterm labor and immediately made an appointment with her obstetrician. As her doctor examined the first-time mom, her doctor discovered Lindsay was two centimeters dilated, and her amniotic sac was bulging through her cervix.

“My doctor told us that I would probably deliver within 24 hours,” Lindsay said. “We were afraid that we would lose the baby because I wasn’t even 24 weeks yet.”

A small but mighty bundle of joy 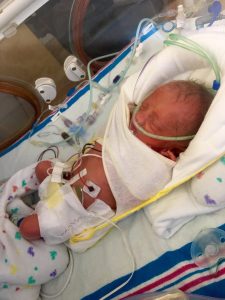 At 30 weeks pregnant, Lindsay experienced some cramping. The care team checked Lindsay’s cervix to see if she was in labor.

“They said I was 10 centimeters dilated, completely effaced and the baby’s feet were coming out,” Lindsay said. “I was prepped for surgery right then.”

Because the baby was breech and preterm, the care team thought it would be safest to perform a caesarian section.

The Neonatal Intensive Care Unit (NICU) team from OSF HealthCare Children’s Hospital of Illinois – connected to OSF Saint Francis – was in the operating room to care for Leonie upon delivery.

“The care team rolled her up beside me so I could see her before she went to the NICU, and the only thing I could see was her little face,” Lindsay said. “She was very tiny.”

Besides needing some help breathing, Leonie also had a small issue with swallowing her milk – a common problem in preemies. It was eventually corrected with feeding therapy.

Lindsay’s most memorable moment of the entire experience was the first time she was able to hold her daughter – three days after she was born.

“The feeling of holding your baby for the first time is hard to put into words,” Lindsay said. “I think I held her for two hours.”

The couple utilized the Kangaroo chairs – special chairs designed for the practice of skin-to-skin between parents and their babies in the NICU. Skin-to-skin has numerous benefits for infants, including helping regulate the baby’s body temperature and enhancing the bonding experience.

Lindsay came to the NICU every morning in time for rounds, and Brendan would relieve Lindsay when he got off work.

“The private rooms in the NICU were so nice,” Lindsay said. “It’s such a difficult time in your life, and it was comforting to have that privacy to consult with the care team and the lactation consultants.”

The O’Rourke’s were also thankful for the meals that are provided to parents in the NICU’s family dining room. “It was a gathering place where you would meet other parents and get some perspective,” Lindsay said. 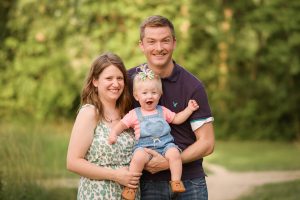 Leonie was in the NICU for 39 days and came home without any need for medication or help with her breathing.

Leonie is now a rambunctious 1-year-old who started walking a month shy of her first birthday. She is at her actual age for all her milestones.

“Being in the NICU isn’t something anyone wants to go through, but I feel like it was kind of a special experience,” Lindsay said.

“So many people took such great care of our tiny, tiny baby. I could never praise the nurses and neonatologists highly enough.”