Not all superheroes wear capes, and some guardian angels live right here on earth. Just ask Kathleen Harms. She was showered with love from a few co-workers who rallied together to do an act of kindness for her during one of the most difficult times in her life.

To say Kathleen has had a tough four years would be putting it lightly. The triage nurse at OSF HealthCare Cardiovascular Institute in Rockford, Illinois, lost both parents within 13 days of each other in March 2014.

Then, in June that same year, Kathleen received a phone call from her sister saying that Kathleen’s brother-in-law had a massive heart attack, unfortunately passing away four days later.

“Those were extremely difficult times,” Kathleen said. “But I always felt supported by my work family.”

After losing three beloved family members, Kathleen was hopeful the second half of 2014 would get better for her and her family. But another tribulation would soon emerge in a few short months.

Kathleen noticed her stomach would hurt when she bent over and when she turned in bed.

“I made an appointment with my doctor, thinking it might be an ulcer from the rough year I’d had,” she said.

A CT scan and blood tests were ordered.

“The next thing I know I was told I had a mass, and an oncologist would be coming to talk to me,” Kathleen said.

Kathleen was diagnosed with gastrointestinal stromal tumor (GIST) – a rare form of cancer that generally starts in the stomach or small intestine.

For two and half years, Kathleen took an oral chemotherapy drug to try to shrink the tumor. However, it had already metastasized into her liver.

Because the chemotherapy wasn’t working well, Kathleen’s oncologist recommended she seek input from a specialized GIST cancer institute. She was approved to go the Dana-Farber Cancer Institute in Boston.

Kathleen had her first evaluation at Dana-Farber Cancer Institute in March 2018 where it was  recommended she come back in the fall 2018 to take part in a phase 3 clinical trial – one phase shy of going to the FDA for approval.

In the meantime, Kathleen’s health deteriorated. Doctors ordered another CT scan and sent it to Dana-Farber Cancer Institute for review.

“A few days after Dana-Farber received my CT scan, they called me to say there was a spot that opened up in the phase 2 trial and would hold it for me if I could get out there,” Kathleen said.

Desperate to get relief, Kathleen made the journey to Boston for the second time in May 2018. She underwent a week of testing where doctors discovered Kathleen had a blood clot that made her ineligible for the trial.

Love when it’s needed most 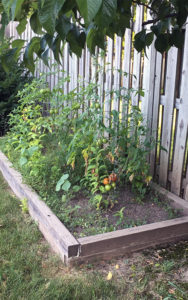 After returning home from the airport with her daughter, Kathleen was standing at the kitchen sink when she saw some of her flower pots in the backyard had been planted.

“I turned and looked at my daughter, and she said ‘you have the most wonderful friends in the world, mom,’” Kathleen said. “I went out back to take a closer look and realized all my flower pots were filled, and my garden was planted with a variety of vegetables. I just stood there in amazement. I couldn’t believe it.”

Because the tumor in her stomach causes pain when she bends over, Kathleen has been unable to garden for a long time – a passion of hers.

Kathleen’s co-workers wanted to remain anonymous for their work. But with a little persistence, Kathleen was able to get them to confess there were about 10 people who helped with the planting.

“I call them my garden fairies,” Kathleen said. “Sometimes you can feel pretty alone during hard times. But this made me feel so loved and cared for. I just can’t say enough about my co-workers. I’m surrounded by the most beautiful, caring people, and I have felt supported since day one of working here.”

Today, Kathleen is continuing to enjoy her beautiful flowers and a bounty of fresh, organic vegetables from her garden. She is scheduled to take part in the phase 3 clinical trial at Dana-Farber Cancer Institute this fall, where she hopes to get some answers and help improve her diagnosis.