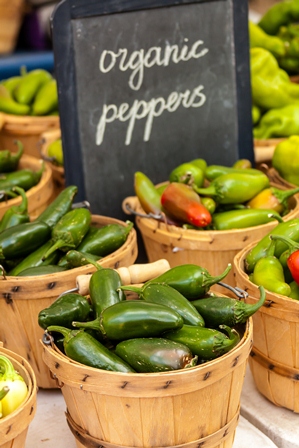 As a registered dietitian, I have often been asked by patients if they should buy organic food and if it is “better” for them. There have been multiple studies conducted comparing organic to conventional produce, including comparisons on safety, benefits and nutrition. With so much information available, it can be difficult to make an informed decision about whether to spend extra on organic produce.

What does “organic” mean?
It is important to remember that the organic certification process does not involve nutritional quality at all. Instead, the term “organic” refers to the methods farmers use to grow and process their foods. Farmers who produce organic food do not use antibiotics, artificial growth hormones, synthetic fertilizers, pesticides, sewage sludge, irradiation (the use of radiation to sterilize food) or genetically engineered ingredients. These are the criteria that differentiate organic foods from conventional foods.

Nutritional Benefits
A study conducted in 2012 stated that “the published literature lacks strong evidence that organic foods are significantly more nutritious than conventional foods.”1 Another study in 2007 stated similar results2.  However, many of these studies did not compare the same varieties of fruits and vegetables grown in similar locations, which can throw off the results. This means that more studies need to be done to say definitively if organic produce is more nutritious than conventional produce.

Why buy organic produce?
There are several reasons why a person might decide to purchase organic foods. Some individuals prefer to limit exposure to residues such as pesticide sprays. It has been theorized that organic produce has more beneficial compounds, such as antioxidants and phytochemicals (a chemical compound found naturally in plants), because they have developed stronger natural defenses against a variety of insects.

Others prefer to restrict their consumption of food additives, such as colorings, flavorings, preservatives, MSG, etc., which are commonly used in conventional foods. Others choose organic food for the environmental impact because organic farming generates less carbon dioxide, chemical run-off in the soil and nitrous oxide (which can cause acid rain) in comparison to conventional farming.

The bottom line
When answering patients’ questions about organic foods, I discuss all of the factors – not just the nutritional comparison – so they can make a fully informed decision about whether to buy organic or conventional food. At this time, there is no conclusive evidence that suggests that organically farmed foods will provide more health benefits than conventional foods.

Choosing to buy organic or conventional produce is a personal choice and will depend on the individual’s budget, personal values towards their health and environment and the availability of organic food in their area. Whatever you choose, the main goal for anyone’s health should be to consume lean proteins, whole grains, nuts, seeds, beans and the minimal recommended servings of fruits and vegetables each day to ensure a long and healthy life.