In a remote village in Kenya, a little girl named Michelle goes to school every day. She is taught reading, writing and mathematics, and she learns about Jesus, thanks to the financial support of an OSF HealthCare Mission Partner and her husband 8,000 miles away.

Today, Michelle also knows that Mission Partner is a real person and not just some mystical concept of goodness. She knows this, because a man recently visited Michelle’s school to tell her about Dawnie Mahrt, a respiratory therapist at OSF HealthCare Saint Francis Medical Center in Peoria, Illinois.

The man is Wismark Nyaata. He was born and raised in Kenya. He is a member of Michelle’s tribe, and when he showed up at the school and asked to see the 8-year-old girl, he spoke with her in their native tongue, Swahili.

“I am here with a message for you,” Wismark told Michelle. “I am here to tell you that Dawnie loves you, she cares about you, she is praying for you, and she wants you to be a success in life.” 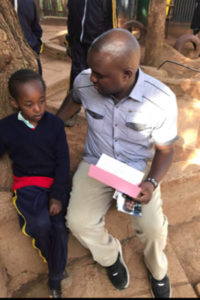 Dawnie and Wismark met in the summer of 2018, when Wismark was a nurse in the intensive care unit at OSF Saint Francis. She noticed his bracelet, which featured the Kenyan flag, and so she told him about Michelle.

When Wismark offered to find Michelle and deliver a care package on his next visit home, Dawnie thought it was “a really nice thing for him to say.” But people say a lot of nice things. Doing them often gets lost, even despite best intentions.

Wismark kept bringing it up, though. Then, when his mother fell ill, he made plans to leave his position at the hospital and return to Kenya to care for her. He told Dawnie, “I’m going soon. You need to give me that care package, and I will find Michelle.”

“I was just so blown away,” Dawnie said.

She bought a coloring book and copied photos of her family – her husband, Nicholas, and children, 3-year-old Sydney and 1-year-old Julian – and wrote Michelle a letter. She gave it all to Wismark, and in December, he returned to Kenya. 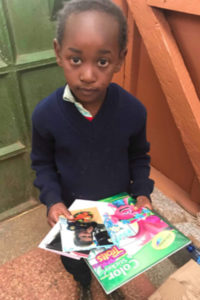 Wismark was driven to find Michelle because some of her circumstances reminded him of his own.

He had grown up in a rural village, an eight-hour drive over bad roads from Nairobi, Kenya’s capital city. Tribal customs and lack of resources can make getting an education difficult for countless Kenyan children, especially in the rural areas.

“Some of the kids, when you get to be 10 years old, your job is just to take care of the cows. You don’t even go to school,” Wismark said. “I was fortunate because my father was a teacher. But I was still in that environment.

“I know the problems of those kids, the challenges they go through; many without parents. So many of the kids lack financial support. Most of them get married at a young age. Some move to the big city and become street children. Some die at a young age because there is no support.”

After finishing school, Wismark won a visa lottery and moved to the United States, arriving in 2008. He spent nine months in New Hampshire, then two years in Delaware before joining some friends in Morton, a few miles east of Peoria.

Although he had been trained as a mathematics teacher, Wismark landed a job as an aide in a nursing home and became inspired by the people who worked there. So he earned his associate’s degree in nursing and was hired by OSF Saint Francis. 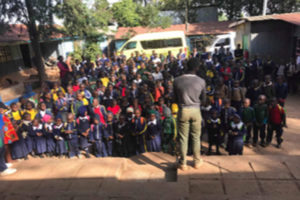 Back in Kenya, Wismark borrowed a friend’s car and set out to find Michelle’s village.

When they arrived, the children ran out to meet the visitors. Wismark explained the reason for his visit and asked for Michelle.

He read Dawnie’s letter to her, translating from English to Swahili. Michelle beamed. They took photos and some video, which Wismark emailed to Dawnie.

And Wismark spoke to all the children. His message was simple: “Work hard, get your education. I came from a village just like this. You can do it, too. God loves you.” 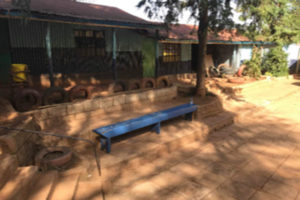 Wismark believes the support Dawnie and her husband provide will be transformational for Michelle.

Wismark, whose heart already was inclined to a life of serving people, said Dawnie’s actions inspire him.

“The act of Dawnie and her husband doing this, helping someone they do not know and not expecting anything in return – I am challenged by that,” he said.

For Dawnie, the experience went beyond the thrill of connecting with Michelle.

“And not even just Michelle, but if he made an impact on any one of those kids that day, think of the trickle effect that could happen from two OSF Mission Partners talking about a bracelet in the ICU.”

Explore opportunities in the Mission-driven culture at OSF HealthCare.