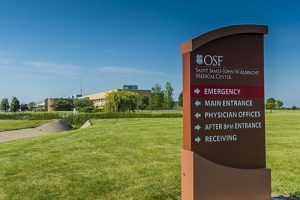 When an annoying bug bite on the back of her leg became swollen and infected, Ann Finnegan went to OSF PromptCare for medical attention.

The 65-year-old Pontiac, Illinois, woman was prescribed a sulfur-based antibiotic, a medication Ann had taken in the past without any problems. She had taken the prescription for nine out of the 10 prescribed days when she developed a rash with big, red splotches over her entire body. That was on September 24, 2017. The following day, Ann went to her primary care provider and began a regular treatment for an allergic reaction.

“I received a steroid shot and then I was to start a steroid prescription the next day,” Ann said.

Later that evening, Ann’s children stopped by to check on her. By then she had developed large blisters about 2 inches across at the pressure points where her legs and arms pressed against the chair where she was sitting.

“I also had a slight fever and was having difficulty swallowing,” she said.

Ann’s daughter-in-law checked on her the next morning. Ann’s fever had spiked to 103 degrees and there were more blisters.

“She hustled me out to the car and we went to the ER” at OSF HealthCare Saint James – John W. Albrecht Medical Center, she said.

Ann was seen by Dr. Patrick Dowling, a staffing decision she credits with likely saving her from long-lasting effects from her condition.

“Dr. Dowling knew immediately what I had and where I needed to go to get treatment,” she said.

Ann was diagnosed with Stevens-Johnson syndrome, a rare condition with only about 20,000 cases reported a year in the U.S.

“Dr. Dowling knew exactly what I had. He even sent one of the younger doctors in to check me out. He told him ‘You need to see this because you may never see this again in 20 years,’” Ann said.

Stevens-Johnson syndrome is a rare, serious disorder of the skin and mucous membranes. It’s usually a reaction to a medication or an infection. Often, it begins with flu-like symptoms, followed by a painful red or purplish rash that spreads and blisters. Complications include dehydration, sepsis, pneumonia and multiple organ failure.

Ann was sent to the Loyola Burn Center. The treatment for Stevens-Johnson syndrome is similar to that of a burn victim because the skin loses connection and sloughs off. Every day, Ann’s wounds were debrided, where the unhealthy or dead tissue was removed to promote healing and protect from infection.

“The debriding was painful,” she said.

Ann also had blistering inside her mouth, which is why she was having difficulty swallowing.

While at Loyola, an ophthalmologist visited every day to check Ann’s eyes because the rash caused by Stevens-Johnson syndrome can lead to inflammation of the eyes. In mild cases, it presents as irritation and dry eyes. In severe cases, it can lead to extensive tissue damage and scarring resulting in visual impairment.

Today, Ann’s skin is healing. She still has large, red splotches that she applies lotion to each morning and night.

“I’m not in pain, it’s not itching,” she said. “It’s just a matter of time before I’m completely healed.”

Ann praises the level of care she received at OSF St. James, Loyola and her primary care provider for her follow-up care.

“I only spent 12 days in the burn unit. It could have been much more if Dr. Dowling hadn’t known what I had and got me treatment very quickly,” Ann said. “I could have come home with a lot more lasting effects.”