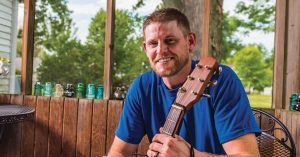 For Daniel Roberts, of Galesburg, December 5, 2013 was like any other work day. Dan was a rough carpenter with the physically demanding job of using a large saw to make assembly line cuts in timbers.

“I was cutting timbers in the shop with a heavy, portable circular saw that has a 16 ½ inch diameter blade.” Dan said. “I had made about 30 consecutive cuts, and I decided to take a break. That’s when I turned to lay the saw on a cart that’s specifically designed to hold the saw.”

But the cart had moved and wasn’t where Dan thought it was. The saw blade, still spinning, cut a 15-inch gash from his groin to his left knee. The 3-inch deep cut nicked the bone and severed his femoral artery.

A nearby French co-worker who spoke little English came over to help. Although he could not understand a lot of what Dan was saying, he did understand the French word “tourniquet.”

“He took his belt off and wrapped it around my upper thigh, groin region,” Dan said. “After that, everything happened fast. The next thing I knew I was being scooted off by ambulance to OSF St. Mary [Medical Center]. The last things I remember are the doors flying open and seeing all of the staff surrounding me. That’s when I knew I had done everything I could do to survive, and I was in the hands of the professionals.

“Everything from that point on is just me telling you what I was told. It was very bad.”

Dan was in a lot of trouble. Depending on how the femoral artery is severed, a person can slip into unconsciousness and even die within a few minutes. The tourniquet had bought him the time he needed for the paramedics to get him to the Emergency Department at OSF HealthCare St. Mary Medical Center. It was all a question of just how much time Dan had.

The emergency staff at OSF St. Mary would have preferred to take Dan by OSF Life Flight to OSF HealthCare Saint Francis Medical Center in Peoria for such a delicate surgery. However, the attending surgeon, Dr. Thomas Whittle, knew that Dan would not survive the flight and required surgery immediately. The Emergency Department staff and surgical team shifted into top gear.

“They got me in the operating room and removed an artery from my right leg and repaired the one in my left leg,” Dan said. “And there was a lot of swelling, so they had to make a large incision and take a chunk out of both sides of my calf to relieve the pressure. They basically sutured my thigh back together.”

Dan had lost nine units of blood, but the surgery was a success.

“I have full capacity in my leg, as far as everyday use goes. There has been some pain here and there but as far as a limp – no. I was able to return to work with no restrictions three months after the accident,” Dan said. “As far as nerve damage and all that, I can’t lift my big toe on my left leg, but the doctor said that may come back over time.

“Usually you bleed out in a matter of minutes when you sever a main artery like I did. They got me in the operating room and went to work on me and not only saved my leg but my life as well,” Dan said. “I never did have to go to Peoria. I stayed at OSF St. Mary for everything.”