When you’re talking about fractions of millimeters, it’s hard to understand how such a small measurement could make much difference. But when it comes to performing brain surgery, reducing your margin of error by even the tiniest fraction can have huge implications.

“Deep brain stimulation should always be performed with the best accuracy possible. If you can have an accuracy within one millimeter, that is what allows us to precisely target whatever area you need to target,” said Andres Maldonado, MD.

Dr. Maldonado specializes in epilepsy and functional neurosurgery – a leading-edge field of medicine that involves using electrodes implanted into the brain to treat epilepsy and other disorders.

After identifying what specific structures of the brain are involved in the disease, Dr. Maldonado is able to use electrical impulses to stimulate specific areas deep inside the brain.

“Nuclei are groups of neurons. By modifying them electrically, we can modify the function related to those areas. We are able to reverse those symptoms almost completely, especially when treating movement disorders,” Dr. Maldonado said.

“With epilepsy, there is a very tiny nucleus in the brain called the anterior nucleus of the thalamus. It’s only a few millimeters long. Deep brain stimulation might be able to dramatically improve the severity of seizures, and in some cases, even stop them.”

When targeting such small structures of the brain, precision is key. Dr. Maldonado’s approach to this procedure is unique. By using a robotic assistant, he’s able to be extremely precise in delivering this life-changing treatment.

With this approach, OSF HealthCare Illinois Neurological Institute is among only a handful of centers in the U.S. using the ROSA robotic surgical assistant to perform deep brain stimulation. 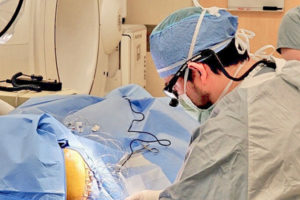 The ROSA robot helps calculate the exact position and trajectory needed to reach the targeted area of the brain. The neurosurgeon places a very thin wire with small electrodes on its tip that will deliver electrical stimulation to a small volume of tissue.

A standard accuracy registration for deep brain stimulation usually falls between 0.8 and 1.2 millimeters.

By using the ROSA robot, OSF INI has consistently demonstrated an accuracy within 0.2 and 0.4. On one recent surgery, the team registered an accuracy of 0.15 millimeters, which is the second best in the nation according to ROSA data.

“That’s about the thickness of a hair,” Dr. Maldonado said.

Those fractions of millimeters can make a big difference in the effectiveness and safety of deep brain stimulation. If the electrode isn’t implanted in just the right place, the neurosurgeon may have to penetrate the brain several times, which increases the risk of bleeding.

But if the electrodes are implanted in just the right place – the effects are astounding while minimizing the risks.

A game-changer for epilepsy treatment

In people with uncontrolled epilepsy – seizures that can’t be controlled with medications or other treatments – surgical treatments are another option.

The robot is used to insert tiny electrodes into the brain through a small opening in the skin and skull to target the areas doctors suspect are causing seizures. This electrical monitoring allows them to see exactly which part or parts of the brain are causing the seizures.

Many times, this so-called “epileptogenic zone” can be surgically removed to either cure epilepsy altogether or significantly improve the seizures.

In some cases, surgery isn’t an option. In those instances, a neurosurgeon may use deep brain stimulation or implant a device called a responsive neurostimulator, or RNS, which works like a pacemaker in the brain to detect seizures and stimulate the brain to stop them.

“You could have a child who is having 60 to 70 seizures a day. If you are able to discover the area of the brain that causes seizures, he could be completely seizure-free with surgical treatment. We have that ability and expertise here at OSF,” Dr. Maldonado said.

With the right people – a skilled neurosurgeon and neurologists who specialize in epilepsy and movement disorders – and the right support, such as an extremely accurate robotic tool, OSF INI in Peoria is one of only a few places in the United States able to offer these treatments.

“OSF INI has the ability to provide care for patients with epilepsy, Parkinson’s disease, essential tremor and dystonia. And we have the ability to do that very accurately. All of that is reflected in the patient outcomes,”  Maldonado said.