Every two minutes someone dies from sepsis in the United States. Currently, sepsis is the leading cause of death – more than breast cancer, prostate cancer and 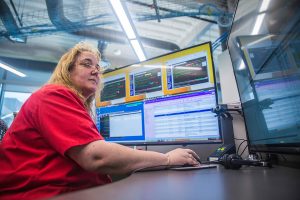 AIDS combined. Approximately 1.6 million cases of sepsis are treated each year in the U.S. and this number continues to increase annually by 9%. Sepsis is an equal opportunity killer! It does not discriminate against race, gender, age or economic status and for every hour without an antibiotic, the rate of death increases by 7-8%. Early recognition and treatment are imperative to save lives.

Even with the vast number of incidences, many people are unfamiliar with sepsis. By definition, sepsis is a potentially life-threatening complication of an infection. When dealing with sepsis, Time Matters! The treatment of sepsis needs to be handled the same as care of a heart attack or stroke.

That’s why OSF HealthCare has come up with a number of actions to quickly identify patients with the illness and treat them accordingly. That includes following new national guidelines and implementing our own innovative solutions using data from our electronic patient record.

Symptoms of sepsis include the presence of fever, hypothermia, increased respiratory rate, increased heart rate, edema (swelling), altered mental status and elevated blood sugar in those without diabetes. As sepsis progresses, the body begins to have an inflammatory response which in turn leads to hemodynamic instability (low oxygenation and low blood pressure), organ dysfunction (absence of bowel sounds, bleeding) and decreased tissue perfusion. Without proper intervention and timely treatment, death is inevitable.

Unfortunately, sepsis is difficult to diagnose. It happens quickly and can be confused with other conditions early on. There is no single test that can identify sepsis. Typically, a combination of tests is ordered to help diagnose and distinguish it from other conditions, detect the inflammation associated with sepsis and to evaluate and monitor the function of the patient’s organs, blood oxygenation and acid-base balance. Currently, three levels of sepsis are defined: sepsis, severe sepsis and septic shock.

Due to the increase in mortality across the United States, the Center for Medicare Services (CMS) has placed an emphasis on decreasing those rates by developing core measures using guidelines suggested by the Society of Critical Care Medicine. The guideline outlines specific diagnostic tools and treatment that must be completed within 3 hours and 6 hours for any patient with suspected sepsis.

Within 3 hours, a complete blood count (CBC), lactic acid level and two sets of blood cultures must be drawn. A large bore intravenous (IV) access must be established and an IV fluid bolus must be given. Within 6 hours, a repeat lactic acid level must be drawn if the initial level is elevated and vasopressors, a medication to improve blood pressure, should be given if the patient continues to have a low blood pressure despite the IV fluid bolus.

To abide by the Mission of treating patients with the greatest care and love, OSF HealthCare has taken on the initiative to decrease mortality and increase compliance with the CMS core measures.

Beginning in September 2016, a multidisciplinary team was formed to focus on sepsis care across the OSF Ministry. Standards of Care for each measure were developed and a goal to decrease mortality was set. Data gathered from patient charts was collected to assist with prioritization of initiatives. Because the majority of patients throughout the Ministry enter through the emergency departments, the team chose to start their improvement efforts with that population.

The first initiative focused on the 6-hour bundle piece of repeat lactate collection in the Emergency Department. Utilizing the capabilities of the electronic medical record (EMR), the team developed an alert that would notify the clinician or provider of an elevated lactic acid level and the need to repeat the test. This has resulted in increased compliance with best practices around blood draws.

The second initiative focused on antibiotic administration in the Emergency Department. Another EMR tool called an “order panel” was created and implemented to assist the providers with ordering the appropriate antibiotics. This panel has not provided the same improvement results as the one developed for repeat lactate. We continue to educate providers on the importance of early antibiotic administration and encourage the use of the panel.

Our most recent and most exciting improvement effort is just starting to be introduced across the ministry. With the help of our Healthcare Analytics team, a new early recognition tool has been developed to assist in identification of probable sepsis. This new tool utilizes predictive modeling to alert Emergency Department clinicians of possible sepsis patients within 15 minutes of initial triage. The predictive tool has a sensitivity of 31% with a precision of 59%. This new model is different from any model currently in use around the globe and proves to be very effective with early recognition. It identifies patients with sepsis on average 68 minutes faster than the current alert system OSF is using.

We are pleased with how our efforts have increased our sepsis identification and treatment. At OSF HealthCare, we realize time matters. The actions we have put in place are assisting with the early recognition and timely treatment. Together, with our Mission Partners, we will continue to serve with the greatest care and love.