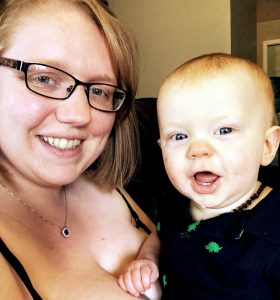 Breastfeeding is a natural thing. But it doesn’t always come naturally.

When Christina Dennis gave birth to her youngest, Jackson, he struggled to latch at the hospital. They continued to try at home … and continued to struggle.

“It was starting to get really painful for me,” said Christina.

Sarah walked Christina through some breastfeeding tips, but she also spied what could be a larger issue. She suggested Christina go see a pediatric dentist to check if Jackson had what is called a lip tie.

“When a baby has a tongue or lip tie, they suck more like you suck through a straw,” said Sarah. “It can really impact the way a baby gets milk, and it can be extremely painful for a mom.”

In addition to affecting breastfeeding, a lip or tongue tie can potentially have an impact on several things, including speech or the baby’s ability to swallow solid foods. It can even cause tooth decay, said Sarah.

Christina had heard of lip and tongue ties before, but was skeptical of the treatment – using a laser or scissors to “snip” the frenulum.

“It seemed kind of crazy to me – taking a laser to the inside of a baby’s mouth!” said Christina. But after listening to a pediatric dentist present at the Baby Expo in Bloomington, she was comforted.

“He said he performed it to his own daughter, which was reassuring,” she said.

Ultimately, Jackson was diagnosed with a lip tie and visited a pediatric dentist for revision.

“I was super scared, but at the same time, I knew there was no anesthetic, so it was a little less scary,” said Christina.

The procedure went quickly, with Christina back in the room and being encouraged to breastfeed Jackson within minutes.

“He cried for a few minutes and was fussy that day,” said Christina. “But it wasn’t really anything more than an infant with a cold.”

Thanks to the revision, as well as coaching from Sarah Musselman and the support of the Moms of Beautiful Babies group, Christina and Jackson just celebrated one year of breastfeeding.

Don’t be afraid to ask for help

“I think I breastfed my daughter for about three weeks,” said Christina. “I didn’t feel the support was there. Now that I know a little more, I suspect she may have had a tie, too.”

Sarah said it’s common for people to struggle. She suggests reaching out to a lactation consultant for advice and guidance.

“When breastfeeding is not going smoothly, we look at a lot of possibilities. Do the baby and mom just need practice with positioning and latch? Or is the baby doing the best they can because of their anatomical variation?” said Sarah.

And be open to all the possibilities – even a thing like a lip tie and/or tongue tie.

Christina said having the lip tie revision was a great thing. “They will feel so much better in the long run.”

As for comforting your baby in the short term, Christina suggested “lots of snuggles.”