Aubrie McShane, of Peoria, chose OSF HealthCare Saint Francis Medical Center to deliver her baby girl. She knew all of her and her baby’s medical needs would be met at the time of delivery – and after.

But when the first-time mom unexpectedly went into preterm labor, she never knew how much she would also appreciate the spiritual support shown to her during one of the most difficult times of her life. 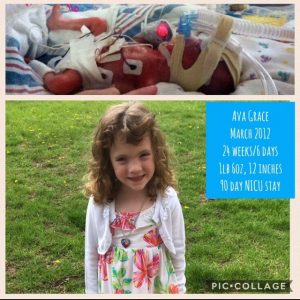 At just 24 weeks, Aubrie felt like her water started to leak, and she began to experience some bleeding. She immediately went to OSF Saint Francis. Her obstetrician performed a sonogram, and the baby appeared to be doing just fine.

“I naively thought that since she and I were fine, we would be heading home,” Aubrie said. “However, I was told my water broke, and I wouldn’t be going home until I delivered her.”

The doctors gave Aubrie steroids and other preventive medicine to help avoid brain bleeds and to help the baby’s lungs grow faster.

“After a few days of being in the hospital, I started kind of losing my mind,” Aubrie said. “Being on bed rest is so foreign to me. I felt like I had no control over anything, knowing there was little I could do to help my baby.”

To help sort out her thoughts, a Sister in Pastoral Care at OSF Saint Francis came to talk with her. “She really helped me to work through my feelings. We still keep in contact with her to this day.”

And just as Aubrie was adjusting to life on bed rest, Aubrie’s daughter was ready to make her grand entrance into the world.

Praying for the best outcome

On March 25, 2012, six days after Aubrie first arrived at OSF Saint Francis, her contractions increased and she felt the need to push.

“I remember the staff, neonatologists, my obstetrician, my mom and sister all gathered around me, and we prayed before delivery,” Aubrie said.

At 3:54 a.m., little Ava was born at 24 weeks, 6 days gestation, weighing 1 pound, 6 ounces. She was 12 inches long. Aubrie recalls that Ava “looked like a baby bird who had fallen out of its nest way too soon.”

Aubrie had Ava baptized right after she was born. “I was so afraid she was going to die,” Aubrie said.

But little Ava was a resilient one. 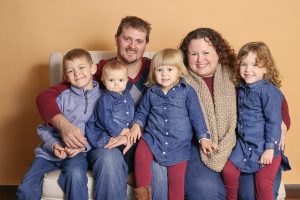 Thankfully, Ava had few health concerns considering she was born early. Her health issues included her kidney functionality, a congenital heart defect and retinopathy of prematurity – an eye condition where abnormal blood vessels grow in the retina. But miraculously, all of these conditions healed on their own without further medical intervention.

“I believe those six days in the hospital prior to her birth not only saved her life but her quality of life.” Aubrie said. “She has zero delays. The outcomes at OSF Children’s Hospital’s NICU are unmatched.”

On the morning of Ava’s birth, Aubrie and her family were able to go to Mass at OSF Saint Francis. “One of the biggest things for me was that my spiritual needs were met. You can’t say that about every hospital.”

Ava is now 5 years old and developmentally on track with children her age. She has no lingering effects from her prematurity and has not required any type of therapy.

Aubrie said she and Ava have a very strong bond, and to her it feels like they are “one and the same.”

“I work in health care and have a good understanding of the decisions doctors have to make. Yes, it’s protocols, best practices, etc. But often times in these critical situations, it comes down to the doctors’ quick decision-making based on their own experiences and training. The specialists in the NICU at OSF Children’s Hospital are the best of the best. The decisions they made throughout this experience saved Ava’s life. I am forever grateful for the team who saved my child.”