Dolores Ott, of Grand Ridge, isn’t your average 88-year-old. Whether she’s hosting her weekly “Rembrandts of Grand Ridge” painting group, volunteering at local non-profits, or spending time with her family, Dolores is never short on things to do.

But her life came to a screeching halt on April 12, 2017. Dolores and her friend, Judy, were shopping and eating lunch in Ottawa. As Dolores drove herself and Judy home, Dolores began having trouble speaking.

“I remember my words were garbled and couldn’t talk,” Dolores said. “I didn’t have any trouble driving though.”

Under Judy’s protest, Dolores dropped Judy off at her home.

“I told Judy I was going to go lay down after I dropped her off,” Dolores said.

Ten minutes later, Judy and her husband were at Dolores’s house insisting that they call an ambulance. Dolores agreed.

The paramedics arrived within minutes and evaluated Dolores.

When Dolores arrived, she was assessed by Dr. Daniel Mueller, an ED physician, who confirmed her stroke symptoms.

For every stroke patient – including Dolores – a stroke alert is activated at OSF Saint Elizabeth. The lab and radiology departments are instructed to clear the computed tomography (CT) table. Within 25 minutes of arrival, the patient gets a head CT scan, which is read by a radiologist within 45 minutes. Blood is also drawn and tested within 45 minutes.

Finally, if the tests confirm a stroke and the care team deems it medically necessary, tissue plasminogen activator (TPA) is given within 60 minutes. TPA is an effective clot-busting drug that works to dissolve a clot in the brain to improve blood flow that is being deprived from the clot, causing the stroke.

“It was concluded that Dolores would benefit from receiving the TPA to help with her stroke symptoms,” Amanda said.

“I never gave it a thought I was having a stroke,” Dolores said. “I really wasn’t in pain. I wouldn’t have laid down if I knew it was a stroke.” 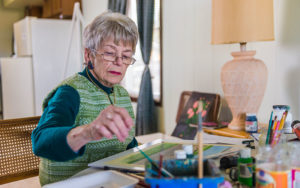 After completing speech and physical therapy after her stroke, Dolores Ott is once again able to enjoy painting in her spare time.

Once Dolores received the TPA, she was transferred to OSF HealthCare Saint Anthony Medical Center in Rockford – a comprehensive stroke center – by an OSF LifeFlight helicopter.

Though OSF Saint Elizabeth is a stroke-ready hospital, all patients are transferred after initial evaluation to a comprehensive stroke center where neurology experts have the capability to do invasive treatments to the brain, if necessary.

“Flying on a helicopter was on my bucket list,” Dolores said. “Though it wasn’t the ideal situation to ride one for. I remember the nurse on the helicopter being so kind and caring.”

When Dolores arrived to OSF Saint Anthony, she was evaluated by neurologist Dr. John Collins. He determined the TPA was resolving Dolores’s stroke symptoms, and she didn’t require any further treatment except for continuous monitoring.

On April 14, Dolores was released to go home.

For the next month, Dolores underwent speech and physical therapy provided by OSF Home Health.

Today, it’s been over a year since Dolores’s stroke, and she has made a full recovery with the exception of her legs not being as strong.

“Everything was handled with such expertise,” Dolores said. “It’s amazing how well I’ve recovered. I owe so much to my friend Judy for making me call 9-1-1.”