Irma Barton has dealt with colitis for about 30 years. She knows when she’s having an episode, due to the type and location of the pain.

Last fall, the 68-year-old Pontiac woman began experiencing severe pain and thought she was having a bout with the colitis.

“It just kept getting worse,” she said.

She finally called her gastroenterologist, who ordered a CT scan of her abdomen in addition to a colonoscopy. Irma’s colon received a clean bill of health, but the CT of her abdomen revealed a large cyst on her right ovary. She was told to contact her gynecologist for follow-up care.

Irma underwent a vaginal ultrasound and it was decided they would just keep a watch on the cyst.

“While we were watching it, I had so much pain I couldn’t stand up some days,” she said.

Because of bleeding ulcers, all Irma could take for the pain was acetaminophen.

“I would be in bed some days from the pain. I couldn’t eat,” she said.

Irma was referred to a specialist in Peoria, but the wait for an appointment was going to be at least a month because it had been determined the cyst was not cancerous. 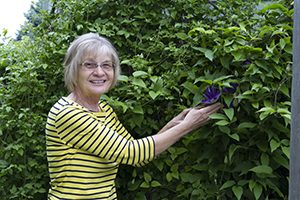 Irma’s daughter-in-law stepped in and arranged for her to see Dr. Jared Zotz with OSF HealthCare Medical Group – Obstetrics & Gynecology in Pontiac.

“They got me an appointment that next day. I went in to see him and he realized I was in a lot of pain,” Irma said. “He said, ‘You have a pretty good-sized cyst there.’”

She was scheduled for surgery the very next day – November 18, 2016 – due to an opening in Dr. Zotz’s calendar.

“It doesn’t always work out that way, but we just happened to have an opening,” Dr. Zotz said. “Especially if someone is in so much pain, I don’t want to put them off that long.”

Following the surgery at OSF HealthCare Saint James – John W. Albrecht Medical Center in Pontiac, Dr. Zotz told Irma’s husband, Gene, and their kids that he removed her right ovary. The cyst was 6 centimeters and had wrapped around Irma’s colon.

“That’s why I was having so much pain,” she said.

Within two weeks, Irma was back to her normal activities, and she can’t express enough appreciation for Dr. Zotz and his staff.

“He was so kind and so sweet – like I’d known him forever. And all the nurses there were wonderful,” she said. “I can’t say enough good things about my experience there.”