Ry and Lacey Colwell were cautiously optimistic when they found out they were expecting their second child.

The couple experienced a miscarriage before having their daughter, Claire, and knew it could be a long road to baby #2.

“We went in for the sonogram right after we got back from vacation, and we’re just expecting to confirm her pregnancy,” Ry said.

“Just quick in and out,” Lacey added.

“They put the sonogram on, and she got quiet for a second and looked at us. She said, ‘I picked up two heartbeats.’ And we could see two sacs on the screen. We were like, ‘OK, twins. That’s cool. We can do this.’” Ry said.

And then the sonogram technician again got quiet.

“And she goes, ‘I just picked another heartbeat.’ And she showed us 1, 2, 3, right there,” Ry said. “There was silence for about an hour and a half after that.”

And suddenly their plan for baby #2 grew to include babies #3 and #4.

The couple’s surprise was certainly warranted. The odds of conceiving “spontaneous” triplets – meaning without the aid of fertility treatments – are only about 1 in 8,100.

“It was a big life-changer. We were just kind of flabbergasted. We didn’t know what to do,” Lacey said.

Lacey continued to see her obstetrician regularly, but she also started alternating appointments with her OB and the maternal-fetal specialists at OSF HealthCare Saint Francis Medical Center.

“They were my peace of mind the whole time. All of our questions were answered pretty quick,” Lacey said.

The Colwells had a lot of preparation to do, and an accelerated timeline to get ready for their new arrivals. While her official due date was January 22, doctors told Lacey she should expect to deliver between 34 and 36 weeks gestation, giving the triplets an expected arrival sometime in December.

Her doctors watched closely for any signs of complications. Since two of the triplets shared a placenta, they were at risk for twin-to-twin transfusion, a condition in which one baby gets more blood and nutrients than the other.

But Lacey says her pregnancy was straightforward – aside from the fact she was carrying three babies.

Ry and Lacey had been told early on in their pregnancy it was likely their babies would need a higher level of newborn care, which was a big part of the reason they decided to deliver at OSF Saint Francis – the OSF HealthCare Children’s Hospital of Illinois Neonatal Intensive Care Unit is in the same building.

“We picked OSF to be our hospital because of the NICU. We knew we were going to have premature babies. We knew they would probably need extra support, and their NICU was highly recommended over any other in the area,” Lacey said.

But while they were prepared for a stay in the NICU, they weren’t exactly sure what they’d find when they got there.

“At first it’s terrifying. You walk in and you hear a lot of machines beeping, but then you meet the staff and you get peace of mind knowing that your little girls are in good hands,” Ry said.

While the triplets were small, they were healthy – but like many premature babies, they required extra support to help them breathe, eat and stay warm. 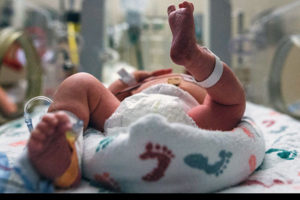 “At first I didn’t want to hold them. They were having trouble regulating body temps, and I was just scared that something I would do would set them back further, so they would be stuck in there longer,” Lacey said, but the NICU staff encouraged Ry and Lacey so they felt more confident as time went on.

“In the NICU, they just build you up. They make sure you’re prepared and that you’re mentally ready.”

So the family settled into a new routine. Lacey and Ry would drop Claire off at day care in the morning, then spend the day in the NICU with the triplets. Ry and Lacey’s parents would go to the hospital in the evenings and head home to be with their older daughter.

“I felt guilty about dividing my time between Claire at home and them. The NICU staff never made us feel bad about having to choose or leaving,” Lacey said.

Even when they weren’t at the hospital, they stayed in close communication with the NICU staff, who would call in the evenings and early mornings to keep them updated.

“They were offering help, offering advice, offering everything we needed all through the journey with these guys. It was comforting knowing that people were there to help and answer all of our questions while we were in the NICU. It took some of the stress load off of us,” Ry said.

The doctors and nurses in the NICU make it a priority to care for not just the babies in their unit, but the entire family, providing training and support when needed.

“It made a hard time easier. It was something that could be really, really difficult – and it was difficult – but the NICU felt like a second home, and it was actually hard leaving the nurses and everybody once it was time to go.”

Chloe was the first of the triplets to come home at six days old. Ellie and Evie, who were born smaller after sharing a placenta, required some extra attention to make sure they were growing and gaining weight.

That meant staying in the hospital for their first Christmas – a difficult night for Ry and Lacey.

“A nurse – her name was Julie – called me about an hour after we got home, just to reassure me that my babies wouldn’t be alone and that she would snuggle them all night,” Lacey said.

Soon after Ellie was home with the family. Evie, the first of the three to be born, was the last to come home on January 3.

“And when Evie came home, Claire looked at me and said, ‘Daddy, no more babies.’” Ry said. 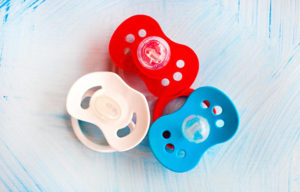 And so their new life as a family of six began. With three newborn babies and a toddler, Ry and Lacey had to figure out how to manage.

“The NICU kept telling us how important it was to have a schedule and that a schedule is key, and that was totally true,” Lacey said.

They found online support groups for parents of multiples, which they say saved a lot of time compared with figuring things out on their own.

“A lot of is planning. We don’t go out as much. We don’t do dinner as much as we used to, but life goes on. This is just our new normal,” Lacey said.

“So instead of staying home because it’s harder, we go out, we do things. So they still get the experiences their sister got, and that way Claire’s life continues the way it was, too – as much as possible.”

So they go out – though they admit they don’t get anywhere very quickly. They took the girls to the pool over the summer and even to the beach on a family vacation.

“The first time I went grocery shopping with them – it was rough. I took the stroller and pushed a cart, and I was not good at it. I probably hit every display in the store, but there was a mom there, and she offered, ‘I will push your cart for you if you want.’ And I said, ‘No, I have to figure it out.’” Lacey said.

And while Lacey insisted on pushing the cart through the grocery store that day, the parents readily admit they’ve accepted the fact that sometimes, you need a little help with four small children.

“There are a lot of people in the community who are excited about the girls and want to help, which is fantastic,” Lacey said.

“We are just very lucky.”