Christmas 2017 will be one the Ferguson family of Clinton, Illinois, will always remember.

Amanda, 32, was expecting her second child and was due on New Year’s Eve. A sonogram performed a couple days before Christmas, however, showed the baby was measuring big, so Amanda’s doctor decided to induce her a week early.

She went to OSF HealthCare St. Joseph Medical Center in Bloomington for induction at midnight on Tuesday, December 26. After laboring for 20 hours, Amanda underwent an emergency caesarean section.

“She came out not breathing,” Amanda said of her newborn, Laura.

The next thing Amanda recalls is 10 to 20 nurses and doctors running through the doors. Among them was a neonatology provider. Just three months earlier, OSF St. Joseph began staffing its Birthing Center with full-time neonatology providers from OSF HealthCare Children’s Hospital of Illinois in Peoria.

“They checked her umbilical cord for her oxygen and gas levels and everything was completely normal prior to her coming out,” Amanda said.

The next six minutes and 22 seconds were the longest Amanda and her husband, Eric, would experience as the care team worked to get Laura breathing.

A higher level of care 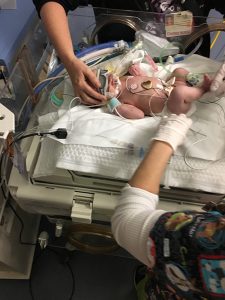 Laura, shortly after arriving to the NICU at OSF HealthCare Children’s Hospital of Illinois. The blanket that looks like “bubble wrap” is the cooling blanket she was on for 72 hours.

Janessa Jenkins was the neonatal nurse practitioner in the OSF St. Joseph Birthing Center the night Laura was born.

“At birth, Laura came out not breathing and limp and required the assistance of myself and the nurses to begin breathing and having a regular heart rate. We tended to Laura immediately after delivery, and she needed CPR for a few minutes to establish a strong heart rate,” Janessa said. “I placed a breathing tube to be able to help her most effectively. Within six minutes of birth, she was taking some breaths on her own and her heart was beating without assistance.”

The concern, Janessa said, was not knowing how long Laura may have gone without getting oxygen. In these cases, there is a treatment called therapeutic hypothermia or “cooling therapy.” It requires lowering the baby’s body temperature to around 92 degrees Fahrenheit and maintaining it there for 72 hours.

Janessa explained it’s not the period of low oxygen or low blood flow to the brain and organs that can potentially cause damage, the problem is the body’s reaction that causes inflammation.

“Much like putting ice on a sprained ankle right away prevents swelling and pain, getting the baby’s temperature down within six hours of the possible injury helps prevent this inflammatory response, and decreases the chance of brain or organ damage,” she said. “There are strict criteria for which babies qualify for therapeutic hypothermia, but Laura was a perfect candidate.”

With Laura just 15 minutes old, the warming equipment that usually keeps infants from getting cold after birth was turned off and her body temperature began to fall slowly.

While waiting for a transport team to arrive to take Laura to OSF Children’s Hospital, Janessa placed intravenous lines in the baby’s umbilical cord to administer medications and fluids.

“We were able to go ahead and obtain all the lab results that the Neonatal Intensive Care Unit team at Children’s Hospital would need,” she said. “It allowed her care to continue to progress while the transport team was en route. When they arrived, they placed her on a special cooling blanket for the transport to Children’s Hospital, to keep her body temperature in the desired range, protecting her brain and organs.”

“That provided me some reassurance being able to at least see her,” she said.

Still recovering from the caesarean, Amanda was released from OSF St. Joseph within 24 hours after having Laura. “My OB was very generous,” she said. 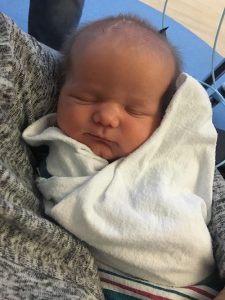 Amanda arrived at Children’s Hospital around 9 p.m. Wednesday, December 27. Fifteen minutes after arriving, Laura was taken off the ventilator and was breathing on her own without any issues.

“Up to that point, I hadn’t got to hold her,” Amanda said. By Saturday, her body temperature was being brought back up as she was monitored for any sign of seizures.

“I’m so thankful St. Joseph had the neonatology staff – I wasn’t aware they had added that,” Amanda said. “They started the cooling process in Bloomington, if they didn’t have those neonatology experts, they would have had to wait until they got to Children’s Hospital.”

Janessa said Laura completed her three days of cooling without complications and was able to go home without any noticeable issues from her dramatic birth. Laura will continue to be watched by developmental specialists, who monitor to make sure she is meeting her milestones on time.

Amanda said Laura is doing great, all thanks to the “amazing team” with OSF HealthCare, and in particular, Janessa who made the decision to start the cooling treatment immediately while still at OSF St. Joseph.

“I’m so glad Laura continues to do well. She is absolutely darling,” Janessa said. “It was my pleasure to be able to take part in her care.”