For decades, the news had been so good. The number of teenagers smoking tobacco products was falling.

“Billions of dollars, tons of manpower and effort, were spent on informing young people about the harms of smoking,” said Timir Baman, MD, a cardiologist at OSF HealthCare Cardiovascular Institute in Peoria. “And we were successful. Smoking rates across the U.S. went down significantly. Deaths, cancers and heart attacks attributed to smoking have all gone down. Things were going very, very well.

“And then the vaping started.” 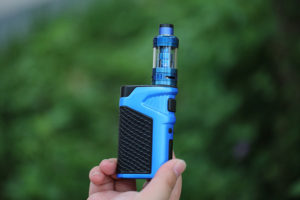 Vaping hit the mainstream American marketplace about a dozen years ago. Manufacturers pushed it as a clean and healthy alternative to smoking tobacco.

Vaporizers come in a variety of sizes, shapes and styles. They include a battery, which powers the heating of a cartridge (also known as a pod) that contains an e-liquid. The user inhales the vapor produced by the heated contents of the pod.

Contents in over-the-counter e-liquids may include:

Pods sold on the street or over the internet, or that are simply homemade, could include an unimagined number of other ingredients.

The delivery of those substances into your cardiovascular and respiratory systems by vaping is on a different level than by traditional smoking. For example, a portion of the nicotine in a cigarette will burn away while not being smoked, but all of the nicotine in a vaping pod gets inhaled.

“People need to understand this is not some benign substance they’re inhaling,” Dr. Baman said. “I can’t imagine inhaling components of antifreeze is good for anybody. And we’re talking about a very concentrated, very efficient delivery of these chemicals.”

The high concentration of these substances in the vapor can overwhelm your body’s defense mechanisms. This can trigger a hyperinflammatory reaction by your body’s organs and tissue.

“A hyperinflammatory state is not good for the body,” Dr. Baman said. “Basically, when people have a heart attack, it’s due to an inflammatory response. Clots form as part of that response, and those clots cause heart attacks and strokes.”

He cited a Centers for Disease Control and Prevention study reported by the American College of Cardiology: Compared to non-smokers, people who vape experience a 56% increase in their risk for heart attack and a 30% increase in risk for a stroke.

Contrast that progression with this: In spring 2019, news reports told of a “mysterious” lung disease being treated in Midwestern emergency departments. The first death was reported in August, in Illinois. By mid-October, the number of cases treated across 48 states and one U.S. territory was over 1,000, the death toll had reached 20 – and medical experts had identified one common thread among the victims.

All had a history of using e-cigarettes – or vaping. 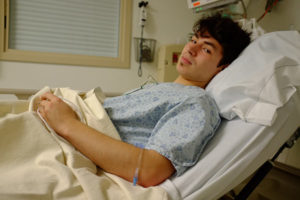 One of the most shocking aspects of the vaping cases being treated is the speed at which people are stricken, fall seriously ill and sometimes die.

But that’s what is going on with the current vaping-related outbreak in emergency departments across the nation. Researchers are scrambling to determine why. What about vaping is so dangerously different?

A majority of the cases have been linked to the presence of tetrahydrocannabinol (THC) in the vapor being inhaled. THC is a chemical compound that produces the high in marijuana.

But not all vaping pods contain THC, and medical personnel have not witnessed similar acute disease outbreaks in users of recreational pot. Clearly, more factors are in play here.

This outbreak caught the medical community by surprise, Dr. Baman said. He cautioned that much about vaping is unknown. More research is required.

The CDC reported that, as of October 1, 37% of those treated were 20 years old or younger. And there is ample reason to fear those proportions among young people will grow.

The dangers to youth are illustrated by the rapid growth in the popularity of vaping among teens. Vaping is perceived as a new and cool thing to do. Juul became the runaway leader in the e-cigarette market largely by chasing the youth demographic through social media.

Altria Group Inc., international giant in the manufacture of tobacco products, purchased 35% of Juul in December 2018, but has pledged not to target the youth market. The medical community is skeptical.

“The cigarette companies are expert in this field,” Dr. Baman said.

He points to advertising campaigns that for decades pushed cigarette smoking as a glamorous and healthy activity. Throughout the 1940s, R.J. Reynolds even bannered the claim that “More Doctors Smoke Camels,” with men dressed as physicians smiling down from billboards and up from newspaper and magazine pages across the nation.

Although it’s not doctors in the vaping ads, the industry is pushing the notion that it’s a harmless alternative to smoking. Vaping hardware is designed to look like a trendy accessory. The variety of flavored pods resembles the offerings of an ice cream shop.

Dr. Baman is disappointed that a long, sad history seems to be repeating itself, and he would like to see a full-scale assault launched against vaping.

“Public education needs to be significantly increased,” he said. “I’m a big fan of those ads that show what people look like when they’ve had mouth or throat cancer. You can go through any hospital and see that. That’s reality. Why sugarcoat it?

“People need to see what happens to your lungs. That tissue does not regenerate. People need to see pictures of heart attacks, see the scar over the entire heart. That’s not reversible, and those are usually autopsy pictures.”