For the third consecutive year OSF St. Francis Hospital & Medical Group has been named a Top Rural Hospital by the “Leapfrog Group,” an independent, national nonprofit organization that rates hospitals based on safety and quality efforts. OSF was one of only two hospitals in Michigan and the only hospital in the Upper Peninsula to achieve this recognition. 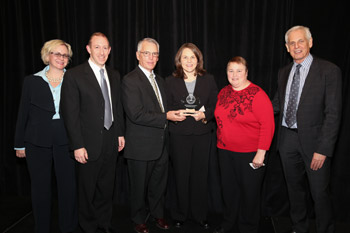 A distinction awarded to hospitals nationwide for demonstrating excellence in hospital safety and quality through the Leapfrog Hospital Survey, the Leapfrog Top Hospital award is given to fewer than seven percent of all eligible hospitals. The annual awards were announced at Leapfrog’s Annual Meeting and Top Hospital Awards on December 2, in Washington, D.C.

“We are honored to have once again been named among this elite group of hospitals,” said Dave Lord, president and CEO at OSF. “Being named a Top Hospital is a rewarding reflection of the work our physicians and staff do, and the exceptional care they provide for those we serve.”

“The Leapfrog Award recognizes institutions for their excellence in quality of care and patient safety, as well as their commitment to transparency. By achieving Top Hospital status, OSF has proven it’s a premier institution and deserves to be recognized for its dedication to the families and patients it serves,” said Leah Binder, president and CEO of The Leapfrog Group.

OSF was one of 94 Top Hospitals, one of only two hospital in Michigan and the only hospital in the U.P. recognized nationally. The list includes:

Among hospitals reaching this achievement are:

Selection is based on the results of The Leapfrog Group’s annual hospital survey, which measures hospitals’ performance on patient safety and quality, focusing on three critical areas of hospital care: how patients fare, resources use and management structures established to prevent errors. Performance across many areas of hospital care is considered in establishing the qualifications for the award, including rates for high-risk procedures and a hospital’s ability to prevent medication errors. Survey results and a list of Top Hospitals are available on the Leapfrog Group’s public website at www.leapfroggroup.org/tophospitals.