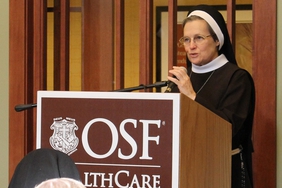 December 2012 - OSF Home Care Services held a blessing for the OSF Hospice Home in preparation for the home to open in early 2013. The Most Reverend Daniel R. Jenky, C.S.C., Bishop of the Catholic Diocese of Peoria, performed the blessing.

"Over the years, Dad would always give anonymously," says their son, Rick Owens.  "But this time around, Mom had her say.

Who were these kind, compassionate people?

"Angels in tennis shoes," says a lifelong friend. "You would never guess they were wealthy people. They loved to give; whether it was a major charity, an extra big tip for a waitress, putting a stranger’s kids through college or simply to a passer-by on the street, but never wanted any acknowledgement or thanks.

Born in Missouri, both Dick and Hootie Owens came from humble backgrounds. He arrived in Peoria in 1960 to look for work; she moved here after they married in 1963.  They had two sons, Rick and Dennis. 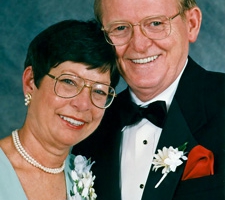 After a successful career in a new field called data processing, Dick joined with two other men to found HBO, a company that developed and leased software for hospital administration. "With only a small house and one car, it was a big risk," remembers Rick. His dad told the family that "this would either make me or break me."

HBO did make Dick Owens. The company was hugely successful, enabling Dick to take an early retirement and devote his time to many philanthropic endeavors.

Their lives were not untouched by sorrow. Hootie's father was diagnosed with cancer when she was in her teens; she took a year off from school to help the family care for him at home. Even though she battled colon cancer for many years, Hootie traveled back and forth to Missouri to help a sister with breast cancer.

Dick was himself diagnosed with lung cancer and with the help of OSF Hospice was able to spend his final months with family and friends at his Peoria home; he passed away in 2003. Hootie lived until 2010, leaving us on Halloween, her favorite holiday.

Before her death, Hootie continued the family tradition of giving. Knowing the difficulties of caring for loved ones with terminal illness, she officially pledged $2 million to help build the OSF Hospice Home. The Owens love and generosity will live on as they help others to make life’s final journey.