Bryce Hyde, of Wood River, has played sports for as long as he can remember. The 12-year-old always finds a sport no matter the season, and he has always excelled and remained injury free. But during the 2016 football season, Bryce took an accidental hit to the helmet after a play was over and suffered a concussion.

“He didn’t tell me about his symptoms. He didn’t want to miss any playing time or even think it was that bad,” Amanda Hyde, Bryce’s mom, said. “It was two days before we realized how serious the situation was. He was having headaches and started throwing up during PE. That’s when I took him to the emergency room.” 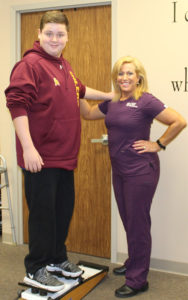 Bryce Hyde works with occupational therapist, Carol Babcock, on improving his balance after suffering a concussion.

Unfortunately, Bryce’s reaction is typical, especially among athletes. Past perceptions about concussions have led people to deny or make light of the symptoms and not seek treatment. But non-athletes can also have the same reaction and prolong seeking medical attention.

A concussion is more than just getting dinged. It is a traumatic brain injury caused by a bump, blow or jolt to the head or by a hit to the body that causes the head and brain to move rapidly back and forth. A concussion can cause chemical changes in the brain, sometimes stretching and damaging brain cells.

In order to diagnosis a concussion, the specialists at OSF Rehabilitation use a program called ImPACT™ (Immediate Post-Concussion Assessment and Cognitive Testing). ImPACT is a computerized evaluation test that allows providers to determine how much damage the concussion caused, helping the care team to develop a personalized treatment plan.

“Bryce had difficulty with the ImPACT test. At that time, he was having difficulty following a pen because his eyes were bloodshot and droopy. He looked tired all the time,” Amanda said. “We worked with Carol Babcock [occupational therapist] and she was amazing. She worked on his balance and hand/eye coordination for four weeks.”

As a part of Bryce’s treatment, Carol used the Balance Master™, an advanced therapy device that uses the same technology NASA uses to measure crew’s pre-and-post-flight equilibrium. OSF Rehabilitation is the only therapy service to offer The Balance Master in the Riverbend.

“The advanced technology allows us to evaluate a patient’s functional abilities and assessment of positions or movements that provoke the symptoms,” Carol said. “Based on the findings from the Balance Master test, we designed a personalized program to treat Bryce’s symptoms and improve his balance.”

“Using a training device, like the Balance Master, gives participants the opportunity to get their senses in sync,” Carol said. “Surprisingly, falls are the number one cause of concussions and not sports-related hits. The Balance Master can also help those with equilibrium problems to avoid falls in the first place.”

Bryce was able to return to school after the four-week period and took several weeks off from any sports.

Be aware of the risks

Recently, concussions have gained national attention after several studies performed on professional athletes proved how serious concussions can be, especially when a person suffers repeated concussions. Amanda wants others to be aware of the dangers.

“I knew concussions were a big deal, but I didn’t know how big. The thing is, you can get a concussion doing anything, so I want to get this information out,” Amanda said. “And the Concussion Program was a blessing. Carol was awesome.”