Snot can come in nearly all shades of the rainbow. And each color of snot – also called mucus or boogers – tells you something different about what’s going on inside your body.

“Different colors of mucus can help tell you something, but they don’t always mean as much as a lot of people think,” said Alyssa Smolen, an advanced practice registered nurse at OSF HealthCare.

The scoop on mucus

Mucus is one of the body’s natural systems of protection. It does things like lubricate the esophagus to make it easier for food to slide down to the stomach, and it coats the lining of the stomach to protect from naturally occurring acid. 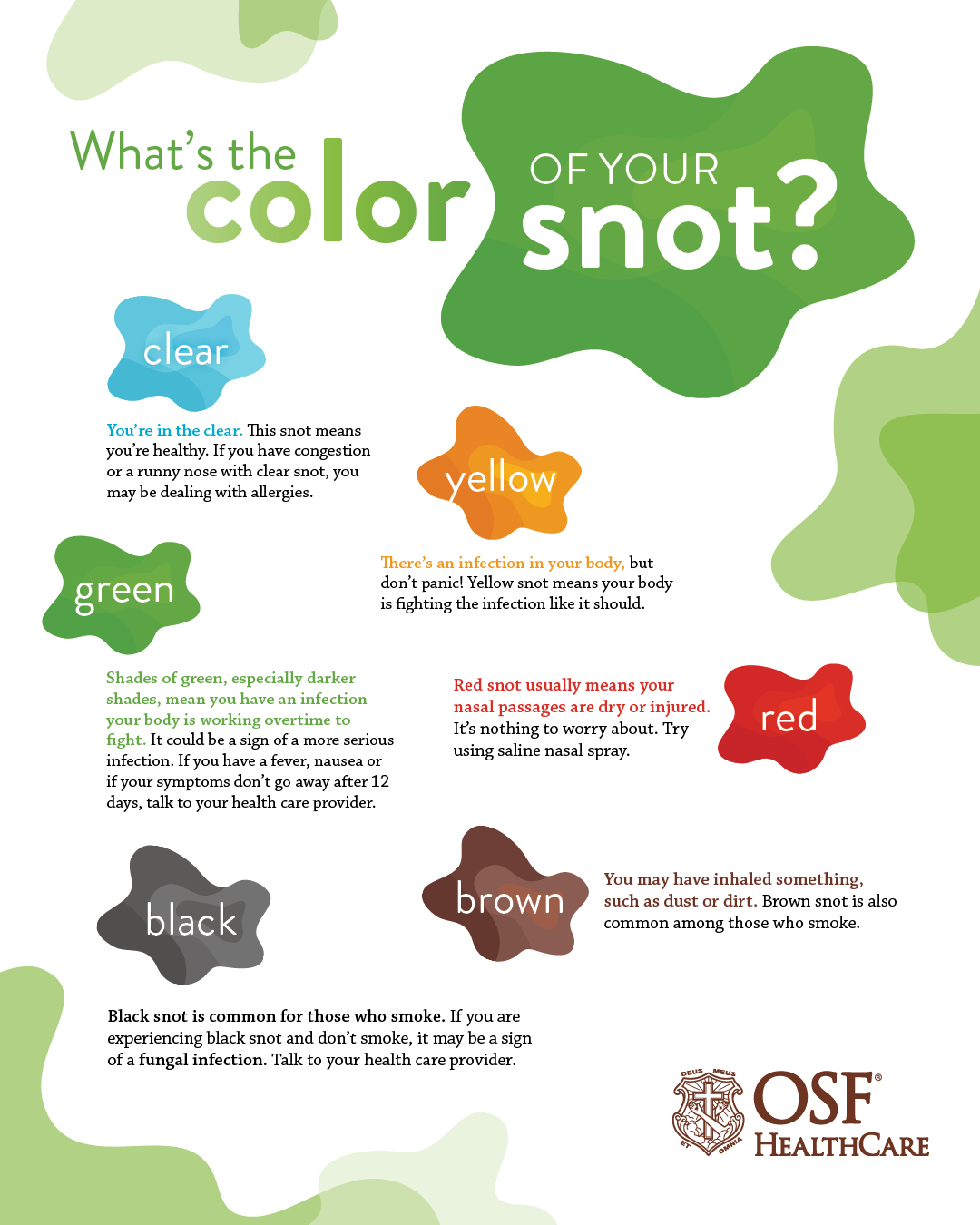 Our sinus, head and neck regions are naturally very moist environments, which means that these areas are commonly gathering places for mucus when our bodies are trying to send us a message.

“Normally, mucus is clear. When you have a cold or infection, it might turn green or yellow,” said Alyssa.

Clear snot usually signals allergies or some kind of environmental factor that is triggering your nose to start running, such as inhaling dust or allergens. Clear snot is nothing to worry about. If it’s an inconvenience, an over-the-counter medicine can help relieve the runniness.

When you blow your nose and see yellow boogers, that usually means your body is fighting an infection. The yellow coloring comes from white blood cells that have rushed to the area to fight off the infection.

Green mucus means that the infection is a bit stronger. The green coloring means that lots of white blood cells have been working overtime to fight the infection. The infection will eventually go away, but if your snot is still showing up green after 10-12 days, talk to your health care provider.

While yellow and green are the most common colors we usually see when we have allergies or are fighting an infection like a cold, we may occasionally run into some other colors.

Red or pink snot means blood, but don’t be alarmed.

“Blood in your mucus is most often caused by irritation of the nasal tissues. This often occurs with viral infections or allergies due to frequent nose blowing or use of nasal sprays that may cause the tissues to become dry,” Alyssa said.

“As long as it’s a relatively small amount of blood mixed with mucus, it’s not something to fret over. If bleeding is continuous and does not stop with pressure, you should be evaluated by a health care provider.”

Similarly, brown snot is likely a sign that you had a cut in your nasal passage at some point that has since healed. Dried blood usually shows up brown, so your mucus is probably just mixed with old blood.

Black snot can mean a few different things. People who smoke will sometimes notice black snot because of the chemicals they inhale while smoking.

Black snot can also appear if you’ve been working in an environment with dust or dirt. In that case, your body is just doing its job to get rid of whatever irritants made their way into your nose, and the mucus will clear out the dust, soot or dirt naturally. However, black snot can also mean a serious fungal infection. If the black snot doesn’t go away, talk to your health care provider right away to get to the bottom of it.

So, when your nose starts running, be prepared to see just about any color of the rainbow! And now you know what, if anything, you need to do about it.