Saving lives isn’t just for superheroes. If you ask Sylvia Eichelkraut, 78, of Ottawa, it’s actually pretty easy. All you’ve got to do is donate blood.

Give the gift of life

> Find a blood drive near you

“People don’t really understand that donating blood actually saves three lives because they divide the blood,” Sylvia said. “It usually takes only about an hour to donate. It’s such an easy thing.”

Sylvia has led the blood drive efforts at OSF HealthCare Saint Elizabeth Medical Center since 2001, after serving for years as a volunteer.

She practiced what she preaches, too, as long as she could. She gave blood regularly until last year, when she developed anemia at the age of 77, making her ineligible to donate. Her husband donated regularly until he was 85.

At the time she took over, the blood drives had been happening twice a year and collecting about 80 units – or pints – of blood each time. The efforts have grown since then. OSF Saint Elizabeth now hosts four blood drives every year, often bringing in up to 150 units per drive.

“It’s just such an easy way to save lives in an hour’s time,” Sylvia said. “It typically doesn’t hurt and you’re saving lives. And it’s so important. They can’t produce blood any other way. They can’t make it in a lab.”

Sylvia’s proud of the volunteers who put in the time to put up posters and make phone calls to spread the word about the blood drives, and she hopes the group of volunteers and donors continues to grow. After all, medical centers rely on access to a ready supply of blood every day. It’s essential for things like surgeries, cancer treatment and traumatic injuries. And the need for blood is growing.

Know the facts, find a drive and donate 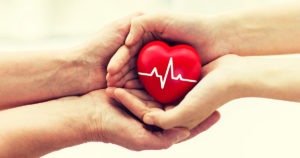 Blood donation helps thousands of people with medical conditions in the U.S. every day. The need for blood for transfusions is significant and the figures are eye-opening.

You can save lives by giving just an hour of your time. So what’s stopping you?

Get familiar with the eligibility requirements, eat iron-rich foods and save yourself some time by scheduling your donation online.