Levi Oster’s health issues started when he was very young.

“We battled a lot of high fevers, rapid heart rate, respiratory issues starting when he was 2,” his mom, Sarah said. 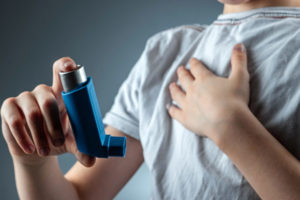 He would sometimes cough so forcefully he would throw up. Other times he would lay awake at night, coughing for hours.

At least once a month – often more frequently – Levi’s parents took him to the doctor with a fever and cough. But they couldn’t get a clear answer as to what was causing his symptoms, which persisted for years.

“He missed a lot of school, to the point that we got a letter in the mail,” Sarah said.

Levi’s parents, Sarah and Digger, searched for answers any way they could. They even tested Levi for cystic fibrosis and leukemia. Finally, they made the decision that they needed to see a specialist.

“He was just constantly at the doctor, and nothing we were doing was making him any better. Digger was the one who said, ‘We’re going to move on from this,’” Sarah said.

So they asked their pediatrician for a referral to OSF HealthCare Children’s Hospital of Illinois.

“We had heard positive things about OSF and a lot of their pediatric programs. We wanted to take him to a place that deals just with little kids who have similar issues,” Levi’s dad, Digger, said.

“And we have never looked back.”

At that first appointment in the pediatric pulmonology clinic, Mohannad M. Mannaa, MD, asked them questions about Levi’s health and family history that no one had before.

“He asked if Levi had eczema, which he does. And he was tying his skin issues to his respiratory issues, which no one else had ever connected. He asked everything about my family, Sarah’s family, the pregnancy, the birth. He really took the time to get to know everything about Levi and see the full picture,” Digger said.

That day, the Oster family got the diagnosis that had eluded them for years: Levi had asthma.

Levi didn’t have the exercise induced asthma – puffing or wheezing brought on by activity that comes to mind when most people think of asthma. Levi’s symptoms were exacerbated by viruses, like a cold, or allergies.

They also left with a peak flow meter to measure how well air flows from the lungs and asthma action plan, so they could learn to recognize the early signs of an asthma flare-up and better manage Levi’s condition at home.

“Two weeks ago, he started with a cough, which is our first red flag that he is going to be episodic, and he had a low grade fever. So I went to his asthma action plan, and I knew that I needed to do the peak flow meter and give him certain medications,” Sarah said.

“For me as a mom, it’s awesome because I’m educated to the point where I know what I need to do and when I need to do it. It allowed me to stay in control of the situation instead of rushing to call the doctor.”

Following the advice and medications prescribed by the pulmonology team at OSF Children’s Hospital, Levi and his family have been able to get his asthma symptoms under control, to the point he only sees his pediatrician once a year for his annual physical and the pulmonologist once every nine months. 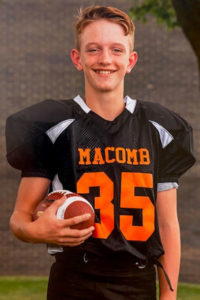 “His condition is stabilized, and he’s doing very well. He’s able to be a normal 13-year-old kid and hang out with his friends,” Digger said.

“He plays football. He plays baseball. He just started track. Track is definitely not something he could have done in the past.”

The days of mysterious fevers, days home from school and nights of sleep lost to uncontrollable coughing fits seem to be over.

“He’s a good student, and that’s in part because he’s able to sleep at night and focus. If he was today like he was in kindergarten and first grade, I think he would be having a great struggle in school,” Sarah said.

Levi’s gone from a child constantly struggling with illness to an active teenager, a transformation his parents would have found hard to imagine 10 years ago when his symptoms suddenly began.