Have a wound that isn’t healing?

> Find an OSF Wound Care location near you

Do you or someone you know have any non-healing wounds?

You’re not alone. In the United States, chronic wounds affect 6.7 million people and the incidence is expected to rise at 2% annually over the next decade.

An aging population and increasing rates of diseases and conditions such as diabetes, obesity and the late effects of radiation therapy contribute to the chronic wound epidemic. Untreated, chronic wounds can lead to diminished quality of life and possibly amputation of the affected limb.

Bodies need oxygen to produce energy and to sustain life.

Research also shows that exposure to pure oxygen at levels higher than what we breathe into our lungs can speed up the healing of hard-to-heal wounds.

That pure oxygen exposure is possible through hyperbaric oxygen therapy.

At OSF HealthCare, hyperbaric oxygen therapy is given in a monoplace (single) chamber, which is built for one person. It’s a long, plastic tube that resembles an MRI machine. The patient is slid into the chamber on a stretcher. Once they are inside the chamber is slowly pressurized and they begin to breathe in 100% oxygen. 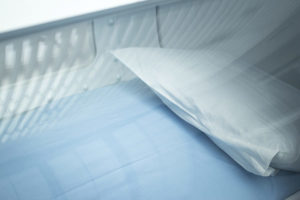 Hyperbaric oxygen therapy was first used in the U.S. in the early 20th century. This was when Orville Cunningham used pure oxygen to successfully treat someone dying from the flu. He developed a hyperbaric chamber, but dismantled it after his use of the therapy for other conditions failed.

The therapy was tried again in the 1940s when the U.S. Navy used hyperbaric oxygen to treat deep-sea divers who had decompression sickness. And by the 1960s, the therapy was used to treat carbon monoxide poisoning.

“Our most common uses include treatment for refractory osteomyelitis (chronic infection of the bone) and diabetic foot wounds,” Dr. Leonard said. 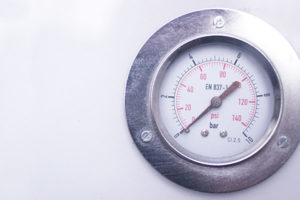 Use of the hyperbaric chambers usually involves 90-minute treatment times. Patients are seen five days per week for 4-6 weeks, dependent upon the treatment plan.

The most common complication during hyperbaric oxygen therapy is injury to the middle ear. This is quickly resolved with the insertion of ear tubes by an ear, nose and throat specialist. Once tubes are placed, it is safe to resume hyperbaric treatments.

Other possible complications may include vision impairments, which typically resolve on their own following completion of treatment, lung collapse (rare) and sinus problems.

Talk to your doctor

Access to hyperbaric oxygen therapy gives patients with chronic non-healing wounds another option or chance of saving a limb. Hyperbaric oxygen along with other wound therapies can decrease wound healing time for chronic wounds that would otherwise go unhealed.

Considering the possible risks and benefits, the decision to use hyperbaric oxygen therapy should be carefully made after a discussion with your health care provider.