In July 2009, Brady Sumner, of Brimfield and 3 years old at the time, started having abdominal pain on his left side.

“His doctor didn’t think it was concerning at the time and said we should continue watching it,” said Lonna Sumner, Brady’s mother.

But in January 2010, Brady came down with a fever, and Lonna took him to his pediatrician to be examined.

The doctor thought Brady’s spleen was enlarged, so the doctor ordered labs and concluded Brady was dehydrated, had pneumonia and was in acute kidney failure, which occurs when the kidney can’t filter the blood properly. That meant that Brady’s kidney was enlarged – not his spleen.

To understand his acute kidney failure, Brady needed an ultrasound. What they discovered was surprising.

“The ultrasound showed that Brady only had one kidney, which was odd because in my prenatal ultrasounds they believed Brady had two,” Lonna said.

Brady was referred to OSF HealthCare Children’s Hospital of Illinois Urology, and another round of tests were ordered to understand his kidney condition better.

The tests showed Brady’s lone kidney had a high-grade urinary reflux – a condition where urine in the bladder flows back into the kidneys and the tubes of the bladder, called ureters. Tests also showed he had a UPJ obstruction – a blockage where the kidney attaches to one of ureters, which prevents the flow of urine from the kidney. This explained Brady’s abdominal pain on his left side.

In the meantime, Brady was given fluids and antibiotics to reverse his kidney failure.

The only resolution for the type and severity of Brady’s urological condition was surgery, but it had to be postponed due to the pneumonia. He was kept on antibiotics until the surgery date.

“At the time, the robotic surgery was a new procedure at Children’s Hospital. Dr. Rhee was one of only a few doctors in the country doing this,” Lonna said. “On the other hand, the open procedure had a longer recovery time.” 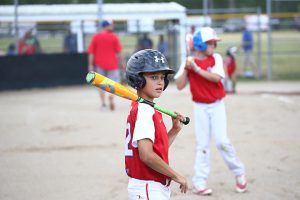 After some discussion, Lonna and her husband, Brandon, decided the daVinci® Surgical System was the best choice for their son.

“It was the four most agonizing hours of our lives,” Lonna said. “However, Dr. Rhee had someone from his staff update us every half hour to let us know what they were finding and what they were doing. He went above and beyond what was required of him.”

Within 12 weeks, Brady was back to being an active 4-year-old with only simple lifestyle changes to maintain a healthy kidney, like staying hydrated.

“I always knew OSF HealthCare Children’s Hospital was a fantastic hospital from friends who have used services before. But I think until you actually go through something like we did with Brady, you don’t realize how lucky the area is to have this sort of top-notch health care – so close to home.”

When asked what her most memorable moment of the entire experience was, Lonna explained with emotion that it was when the child-life specialist – someone specially trained to help children and families understand illness, hospitalization and procedures – came out after they had taken Brady back for surgery. She told Lonna and Brandon that Brady had been crying before surgery. But that the child-life specialist had held and comforted Brady until he fell asleep.

“It makes me cry to this day because I couldn’t be there with him at that moment. For that child-life specialist to be there to love him like a mom, is probably the thing I will always remember the most.”

A Bright Future Ahead

Today, Brady is a healthy 11-year-old boy, whose love for baseball runs deep. He currently plays on a competitive baseball team and is enjoying a healthy life.

He continues to see Dr. Rhee every six months for follow-up appointments to make sure his kidney function is at its best.

Lonna explained that what she was most surprised about with this entire experience is the attention Dr. Rhee and the rest of the staff have given Brady and her family.

“Dr. Rhee’s bedside manner is amazing. He explains everything in great detail. There were several times when we first found out about Brady’s kidney condition that I would call the office several times because I was confused about something, and Dr. Rhee himself would call me back and answer all my questions. There has never been a time we have doubted Dr. Rhee’s care for our son.”