Rebecca Hansen of Dunlap, Illinois, did everything right to stay heart healthy. She worked out five times a week, ate a nutritious diet and went to regular checkups with her doctor.

With a strong family history of heart disease, she knew she was still susceptible to heart-related conditions – a fact she never wanted to come true.

But around 2 a.m. on February 4, 2014, Rebecca had to face the harsh reality that genetics don’t exactly play fair. 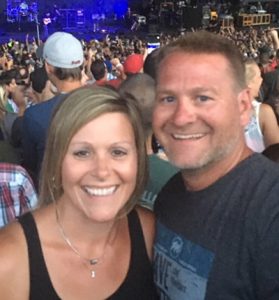 Rebecca woke up with intense pain in her arm, similar “to someone running over my arm with a car.” With no other symptoms, she attributed the pain to exercise.

“I had been doing kick boxing classes, and I thought I had done something to my shoulder nerve or my rotator cuff,” Rebecca said. “I put ice on it and thought that would take care of it.”

But when the pain didn’t get better, Rebecca decided to go to an OSF PromptCare.

“Just before leaving to go to the PromptCare, I started feeling pain in my chest,” Rebecca said. “But I have had panic attacks before, and that’s exactly what the chest pain felt like.”

OSF PromptCare performed an electrocardiogram (EKG) – a test to show the electrical activity of the heart. The EKG didn’t specifically show a heart attack, but didn’t look normal. That’s when the care team at OSF PromptCare decided to send Rebecca to OSF HealthCare Saint Francis Medical Center by ambulance.

“I was in disbelief,” Rebecca said. “I didn’t think it was possible I was having a heart attack. I was 38 at the time and did everything I was supposed to do to stay healthy.”

When in doubt, check it out

When she arrived to OSF Saint Francis, a sonogram was immediately taken of Rebecca’s heart. The sonogram showed Rebecca’s left descending artery was 100 percent blocked, which meant Rebecca was having a heart attack.

She was immediately rushed into surgery for a procedure called an angioplasty. The procedure opens the blocked artery, restoring blood flow to the heart.

“My advice to others is to get something checked out if it doesn’t feel right or feels different than normal,” Rebecca said. “I think as moms and busy, working women, we brush things off as no big deal.”

After Rebecca recovered from surgery, she went to a cardiac rehab program three times a week for six weeks at the RiverPlex in Peoria. The program helps a patients recovering from a heart attack build strength in their heart muscle again.

Today, Rebecca is back to her regular exercise routine and sees a cardiologist annually to help monitor her heart.

“Every day I’m thankful,” she said.