Stewart Craig has never been one to lack for things to do. The Rockford resident has always stayed busy thanks to a 30-year career as a financial adviser, coaching high school softball and spending time with his family.

“My dad is personable, loves to tell jokes and has a ton of friends,” says daughter Annie Peiffer.  “He’s had a big influence on the Rockford community through his work and his coaching.”

Stewart’s life, however, came to a crashing halt in October 2015, when he suffered a debilitating stroke that left him unable to speak and paralyzed on his left side. He was rushed to OSF HealthCare Saint Anthony Medical Center, where he spent weeks in the neuro intensive care unit, before continuing his rehabilitation in Sycamore and Chicago.

“It just came out of nowhere,” said Annie, an elementary school teacher. “The care at OSF Saint Anthony has been really good. It was such a scary time for us but the nurses and doctors were so good caring for my father and communicating the situation to our family. We were very impressed.”

This wasn’t the first time the Craig family faced adversity. Stewart’s wife, Sally, passed away eight years ago from breast cancer. That’s when Annie moved home from Champaign, to be with her grieving father, who also receives support from Annie’s siblings, Ben Craig and Jeanne Harrison.

“When my mom was sick my dad was so selfless,” she said. “He made her feel comfortable. Now it was our turn to take care of him.” 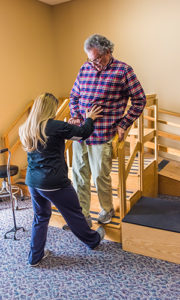 Since Stewart’s stroke, OSF Saint Anthony, the number one hospital for stroke care in Rockford, has become even better.

Surgical stroke intervention requires the use of a biplane angiograph that provides a 3-D image of the brain so specialists can see the blood clot causing the stroke, enter the brain with a catheter and remove the clot.

“The benefits of interventional treatment for stroke are better than many other treatments we have today in health care,” says Dr. Harneet Bath, Chief Medical Officer at OSF Saint Anthony. “For the patient who ends up being better, it’s priceless. When you have a stroke, surviving is the important thing, but not walking out with a disability is also important.”

Two years after his stroke, Stewart continues the healing process. He has some form of therapy every day at OSF and in Chicago, and is now walking with a cane more than 1,000 feet without stopping. He can use stairs with minimal assistance and stands from a seated position without assistance. While his speech remains limited, he can now master some sentences with practice.

Janelle Sester is a personal fitness trainer at OSF HealthCare Saint Anthony Medical Center who works with Stewart. She also happens to be one of his former softball players. “Being able to work with Stewart here at OSF while he is recovering has fulfilled me in many ways,” Janelle said. “If I never accomplish anything else in my career, I will always have a sense of satisfaction and completion from being able to give back to someone who gave so much to me.”

During his free time, Stewart goes to lunch with friends, watches Chicago Cubs baseball, and takes his golden retriever, Sonny, for walks. Last year, Stewart was able to attend a World Series game at Wrigley Field in Chicago with his family and has traveled to one of his favorite destinations, Key West, Florida.

“He doesn’t let anything hold him back,” said Annie. “He definitely misses things he used to do like work, but now he views his therapy as work. We focus on what he can do and what he enjoys. It’s a new reality.”