Are you 50? Learn your screening options.

> Start with a primary care provider

As she approached her 50th birthday, Linda Connolly heard the lectures and saw the warnings: Get a colonoscopy.

But Linda ignored the commercials, news stories and mailings and blew right past the milestone. She was healthy and active. She didn’t have time to take off a day from work. And what she had heard about the preparation process left a lot to be desired.

“I should have taken a day off from work five years ago, and maybe I wouldn’t be here now,” Linda said.

At 55 years old, she finally relented and scheduled a colonoscopy. She got the results on February 14.

“Being Valentine’s Day, I asked my husband what he was doing. He said he had meetings,” Linda said. “I said, ‘Well, I have cancer. Why don’t you take the day off and talk to me?’ So he did.’”

The good news is that Linda’s cancer was confined to one polyp and was Stage 0-1. The polyp was removed during the colonoscopy, and Linda worked with her OSF HealthCare cancer care team to build an aggressive plan that includes frequent testing to help ensure long-term survival.

But Linda wonders how things might be different if she had undergone the colonoscopy half a dozen years ago. Could she have avoided her current treatment plan and the emotional concerns that accompany a cancer diagnosis?

“Colon cancers develop as a polyp, and over a decade they mutate and become cancer. So if you find polyps and take them out, you actually prevent colon cancer,” said Asif Quyyum, MD, cancer surgeon at OSF HealthCare Saint Francis Medical Center in Peoria, Illinois. “Prevention is key. First prevention, then early detection.

“Linda got lucky because we found the cancer early on,” Dr. Quyyum continued. “The vast majority of patients need surgery instead of a colonoscopy to get it out, and a good portion need chemotherapy. You can avoid those things by getting detected early.”

More than 50,000 Americans each year die from colorectal cancers, which rank behind only lung and bronchus among cancer fatalities. 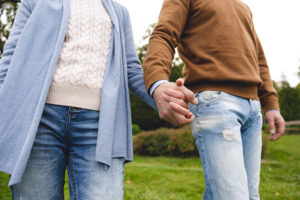 Moreover, rates of colorectal cancers are rising in people under 50, a fact that is driving the medical community toward recommending screens begin at 45. And because it’s a key risk factor, a history of colorectal cancer in your family should make you get a colonoscopy as young as 40, Dr. Quyyum said.

You can take preventive measures such as focusing on an active lifestyle and a healthy diet high in fruit and vegetables. Dr. Quyyum said taking 81 mg of aspirin each day also helps decrease the risk of colorectal cancer.

Then, there’s the colonoscopy.

“It’s a very quick procedure,” Dr. Quyyum said. “You are sedated. Complications and risks are low. The part people really hate is the day-before bowel prep, but that has improved a lot.”

Only a few years ago, preparation the day and night before the procedure included drinking four liters of a foul-tasting concoction, which prompted frequent bowel movements. While clearing your bowels remains necessary, today’s prescriptions are less voluminous and taste better.

‘Best nap you’ll ever get’

Linda’s experience has made her a warrior of sorts on the front lines of screening advocacy. Most recently, she has been lecturing her younger brother, who is 48 and resisting with some of the same excuses Linda once used. “Silly things,” she calls those excuses now.

“I thought it would be uncomfortable, but it wasn’t,” Linda said. “I tell people it was the best nap you’ll ever get. Take it.

“Take the day. It’s OK. I’m helping my brother realize he has to take that day now. It’s OK to take a day for ourselves. We’re all worth that one day.”