On that list was watching the Kentucky Derby from the infield of Churchill Downs in Louisville.

“The only thing we knew about the derby was what we saw on TV every year – fancy clothes, big hats,” said Carolyn’s husband, Barry Mink.

But Carolyn, who worked in new student programs at the University of Illinois-Urbana, was fascinated with the idea. She had a boss from Kentucky who talked about how opulent and exciting it was to watch from the infield as the 3-year-old Thoroughbreds raced in what’s called, “the fastest two minutes in sports.”

The bucket list, however, got put aside as careers and life interfered. And then in the summer of 2016, Carolyn was diagnosed with inflammatory breast cancer at the age of 57.

The couple had already started planning for retirement. The long-term goal was to move into the farmhouse outside of Oneida, Illinois, that had been in Carolyn’s family for generations. To work toward that goal, Barry took a job teaching industrial arts at Abingdon-Avon High School in nearby Abingdon, Illinois.

Carolyn underwent her annual mammogram in January 2016. But a few months later over the summer, Barry said she suspected something was wrong. In her left breast, Carolyn had noticed changes in the size and to the skin’s texture.

“Since she’d had her checkup in January, she didn’t think it was anything. She went in for a checkup with her doctor and her doctor was pretty convinced it was cancer,” Barry said.

In addition to the left breast, there was some cancer in her lymph nodes and spots on her clavicle and liver, which indicated the cancer had spread through her system, Barry said.

“It was Stage 4. Only 3 to 4 percent of breast cancers are this type and it happens to be an aggressive and more deadly one,” he said.

The couple opted for aggressive treatment – strong chemotherapy followed by a double mastectomy.

“The doctors weren’t recommending a double mastectomy, because they said the odds were it wouldn’t come back in the other breast, but she wanted it,” Barry said.

As part of her treatment, Carolyn participated in a couple clinical trials and underwent a combination of immunotherapy and chemotherapy.

“I wouldn’t say it was stopping it, but it seemed to be slowing the growth rate of the tumors for a while. But at some point, it wasn’t making enough progress for Carolyn to stay in the clinical study,” Barry said. “That was a low point, for sure, because that was our biggest hope. The prognosis wasn’t very good from the very beginning – she was never in remission.”

Carolyn didn’t tell Barry or her sisters who helped care for her about the pain she was experiencing. Throughout her treatment, Carolyn continued to work.

“She didn’t tell us the pain she was in. But she eventually got to the point where she couldn’t work and went on disability,” Barry said.

The tumors began to grow rapidly. Barry and Carolyn’s sisters, who took time off from their jobs in Seattle, Washington, and Austin, Texas, were providing around-the-clock care. They began with OSF Home Health in early 2018.

“They came in a couple times a week. They got us all the supplies we needed. It was a great help,” Barry said.

By mid-spring of 2018, the family turned to hospice services with OSF HealthCare.

“That was a tough call, she was having a bad day,” Barry said. “It was a difficult choice because we basically had to give up any treatment at that point.” 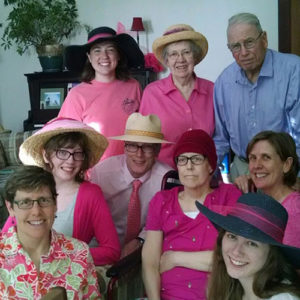 Carolyn Mink had a bucket list, and watching the Kentucky Derby from the infield of Churchill Downs was on it. When her cancer progressed, Carolyn’s sister told her about the Kentucky Oaks and tickets were purchased. The race is held the day before the derby and is dedicated t bringing awareness to women’s cancer. As the day neared, Carolyn was unable to travel so the hospice staff with OSF HealthCare arranged to rent a large screen TV for the Mink family. They gathered the day of the Kentucky Oaks dressed in pink, wearing fancy hats and watched the festivities together. Carolyn passed way 11 days later.

That’s when Carolyn’s bucket list took on urgency. The Kentucky Derby was approaching.

Carolyn’s sister had heard about the Kentucky Oaks, the race held the day before the Kentucky Derby for 3-year-old fillies (female horses). During Kentucky Oaks Day, Churchill Downs is decorated in pink bunting and the more than 100,000 spectators are asked to wear pink to raise money and awareness for the fight against breast and ovarian cancers.

“We weren’t necessarily big horse racing fans, but when she heard about the Oaks and that it was dedicated to bringing awareness about women’s cancer, she wanted to go,” Barry said.

Carolyn bought three tickets and plans were made. The OSF Hospice team set up the Minks with a travel kit – portable oxygen, medicine – everything needed to keep Carolyn comfortable for the trip to Louisville.

A change of plans

As the day approached, it became apparent the family wasn’t going to be able to travel to Louisville, Barry said.

“We decided to have a Kentucky Oaks TV party instead,” he said. “When the OSF Hospice staff heard of this, they arranged to rent a large screen TV and have it delivered and set up at our house.”

“Our family will never forget watching the races that day,” Barry said. “The Kentucky Derby and Oaks weekend will always hold a warm memory for everyone there.”

Carolyn passed away May 15, 2018, just 11 days after the viewing party for the Kentucky Oaks.

Thankful for the care

“When she first started treatment, we were hoping maybe it would give her five years. Carolyn probably felt things weren’t great, but she didn’t share that. She just had a super attitude about everything. I think that’s what everyone remembers about her,” he said. “Carolyn wrote letters for the church bulletin about her journey, her faith, the struggles, and several months after she passed they still appeared.”

Having OSF Home Health and hospice in the home during the last stages of Carolyn’s life was a great relief, Barry said.

“They took us out of the role of caretaker and allowed us to just be family. Mentally, it gave us a break. I highly recommend it to others who find themselves in the same situation,” he said. “OSF Home Health and hospice care provided service above and beyond what our family could have ever wished for and we can’t say enough about the compassion and concern for Carolyn that everyone from OSF showed throughout her treatment.”

Click here for resources to help determine if hospice is right for you or your loved one.

Top photo caption: Carolyn Mink is pictured with her mom, Audrey.  Audrey passed away December 13, 2018. She was the caretaker for Carolyn’s dad, Charles, who has Parkinson’s. Carolyn’s husband, Barry, said the stress from Carolyn’s illness took a lot out of Audrey and shows how tiring being a caretaker can be for family members.