Matthew and Samantha Monk were expecting their first child. But 17 weeks into Samantha’s pregnancy, a sonogram showed the baby’s diaphragm had not formed properly. His liver, stomach and bowels were developing in his chest, leaving little room for the lungs to grow.

On October 11, 2017, at 39 weeks pregnant, Samantha, a Pediatric Intermediate Unit nurse at OSF HealthCare Children’s Hospital of Illinois, gave birth to their son, Harlan, at OSF HealthCare Saint Francis Medical Center. Though the couple were thrilled to meet their son, they knew this was just the beginning of a long road ahead for him. 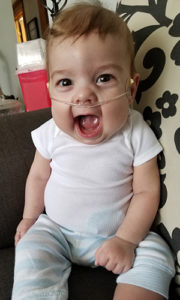 At only 5 days old, Harlan underwent surgery to correct his condition, called a congenital diaphragmatic hernia or CDH, performed by Dr. Charles Aprahamian, a pediatric surgeon at OSF Children’s Hospital.

“I’ve cared for some children with CDH as a nurse and have seen some of the challenges children with CDH can face,” Samantha said. “Being on the other side of things this time was difficult. The surgery is the first step with CDH patients, but there are usually long-term issues to face like feeding, breathing or weight gain issues.”

After a successful surgery, Harlan was doing well, but soon he took a turn for the worse. His lungs weren’t providing enough oxygen to his body. He was put on life support, which helped give his lungs the break they needed. One week later, his lungs were functioning better on their own.

Harlan spent the next three months in the Neonatal Intensive Care Unit (NICU) where his journey with OSF Rehabilitation began.

From the moment Harlan was born, his care team focused on the CDH. He wasn’t able to feed like typical newborns for the first few weeks of his life. So Harlan began feeding therapy right away.

“They gave him breast milk tastes to prevent him from getting an oral aversion to it and also helped us with bottle feeding,” Samantha said. “Harlan was uncoordinated at first. The rehab team worked with us on ways to make it easier. They kept encouraging us, making small gains feel like huge accomplishments.” 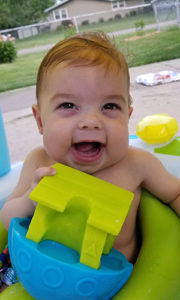 Harlan was released from the NICU at 3 months old only to be readmitted to the hospital two days later because he wasn’t able to keep food down. He spent the next two weeks in the Pediatric Intermediate Unit (PIC) at OSF Children’s Hospital.

While in the PIC, Harlan was evaluated for physical and occupational therapy, helping the Monks understand what milestones Harlan should be hitting.

Two weeks after being in the PIC, Harlan was released to go home, where he was able to stay. That’s when he began outpatient rehabilitation services, including physical, occupational and continued feeding therapy at OSF Children’s Hospital clinic at Five Points in Washington.

“His core muscles weren’t as strong as they should have been because of his abdominal issues,” Samantha said. “He really disliked tummy time, so they taught me different ways to do that without him thinking he was really on his stomach – among other exercises to build his strength.”

Today, Harlan is a joyful, healthy, 8-month-old. He goes to therapy every two weeks where he has been recently working on fine motor skills, sitting up and trying solid foods.

“In terms of milestones, he is at or close to his age group,” Samantha said. “He has come so far in the last five months. I can’t say thank you enough to the pediatric rehab team for how much they’ve helped Harlan and encouraged our family.”